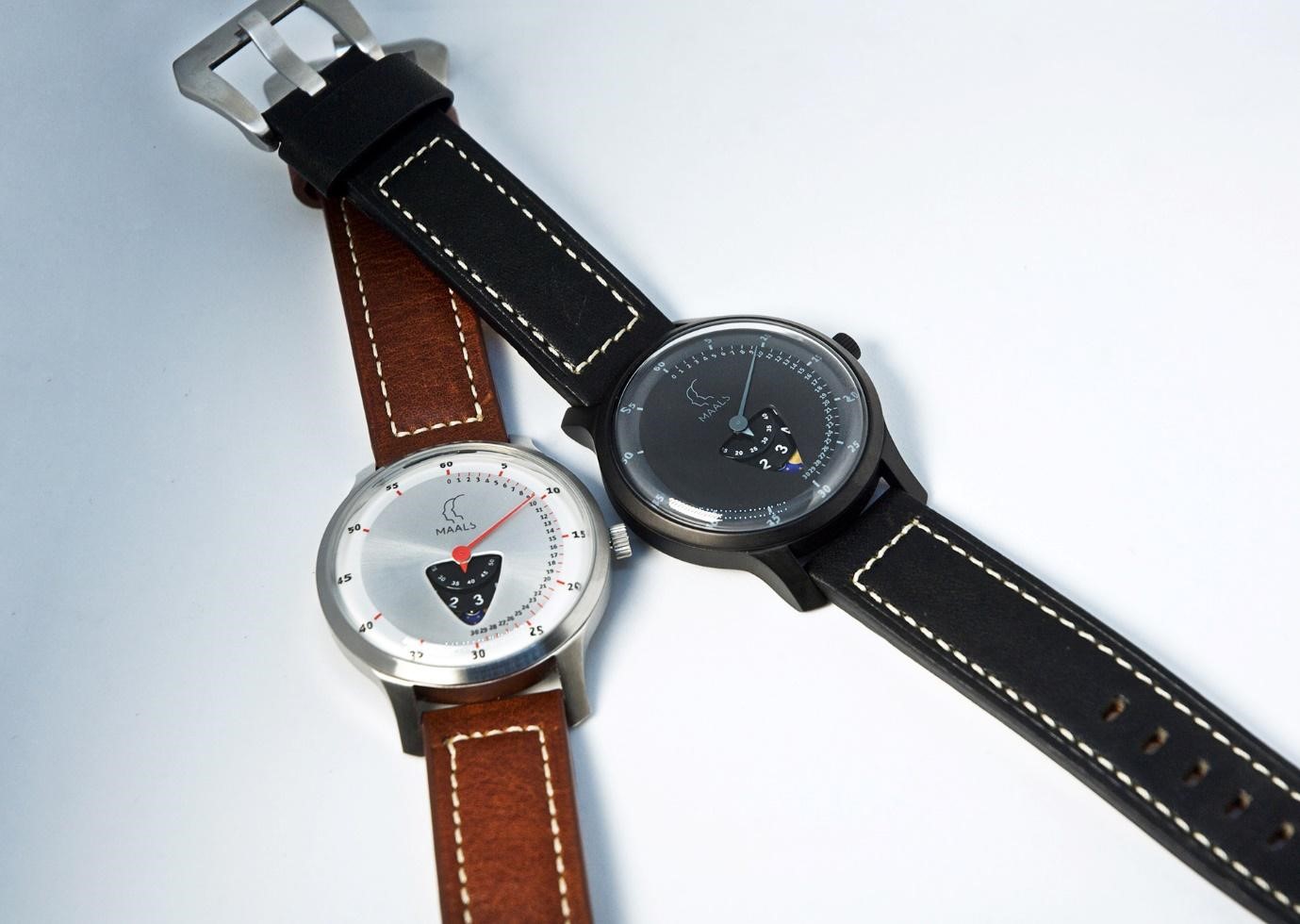 Microbrands are becoming increasingly popular for several reasons. Watch fans respond well to timepieces that have been crafted with an obvious attention to detail, while a clear passion for the industry is desired. Few up and coming brands achieve these goals, but a new British microbrand is setting a standard for high-quality watches with a winning personal touch.

MAALS Watches is a new microbrand that has debuted its website this month and will begin crowdfunding on Indiegogo shortly. Encapsulating the sleek craftsmanship and aesthetic of several inspirations, the company’s Just Over The Moon range of watches are destined to become mainstays in timepiece collections around the world.

In more ways than one, the Jump Over The Moon is truly a work of art. That’s no surprise considering the brothers who have nurtured MAALS into an exciting new microbrand have a love of design. With that in mind, the Jump Over The Moon harks back to the bold stylings of 70s classic watches, boasting an elegant finish and effortless charm.

In the early process of creating MAALS, the brothers were heavily influenced by their love of watch collecting, and specifically 70’s style jump hours. It was an obvious choice to debut with a jump hour style, so the team set to work on creating something that would stand out from the crowd. 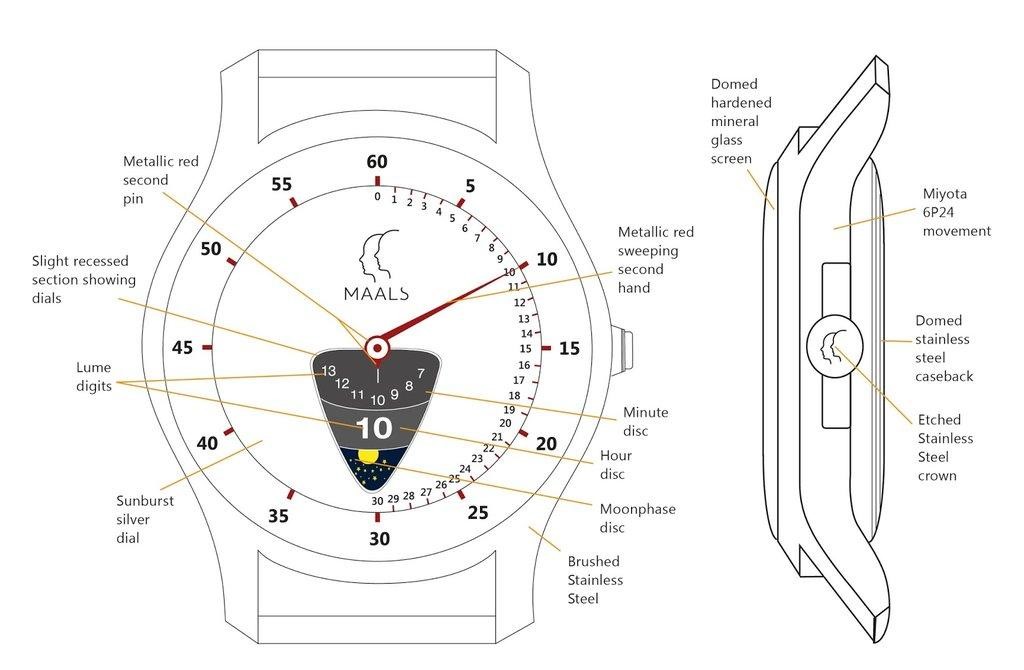 The Jump Over The Moon certainly succeeds thanks to its luxurious aesthetic. One of the standout aspects of the watch is its relative simplicity of design. MAALS says it did not want a “heavily designed” watch and instead sought a subtle form with enticing splashes of detail.

To achieve the ambition of a dignified timepiece harking back to classic designs, the company set out some important guidelines for the design process:

Jump Over The Moon

After a careful design process, MAALS turned to a Hong Kong-based ODM (Original Design Manufacturer) to build the company’s debut watch. Jump Over The Moon is the result, a timepiece that can be deemed an instant classic thanks to its undoubted build quality and attention to detail. 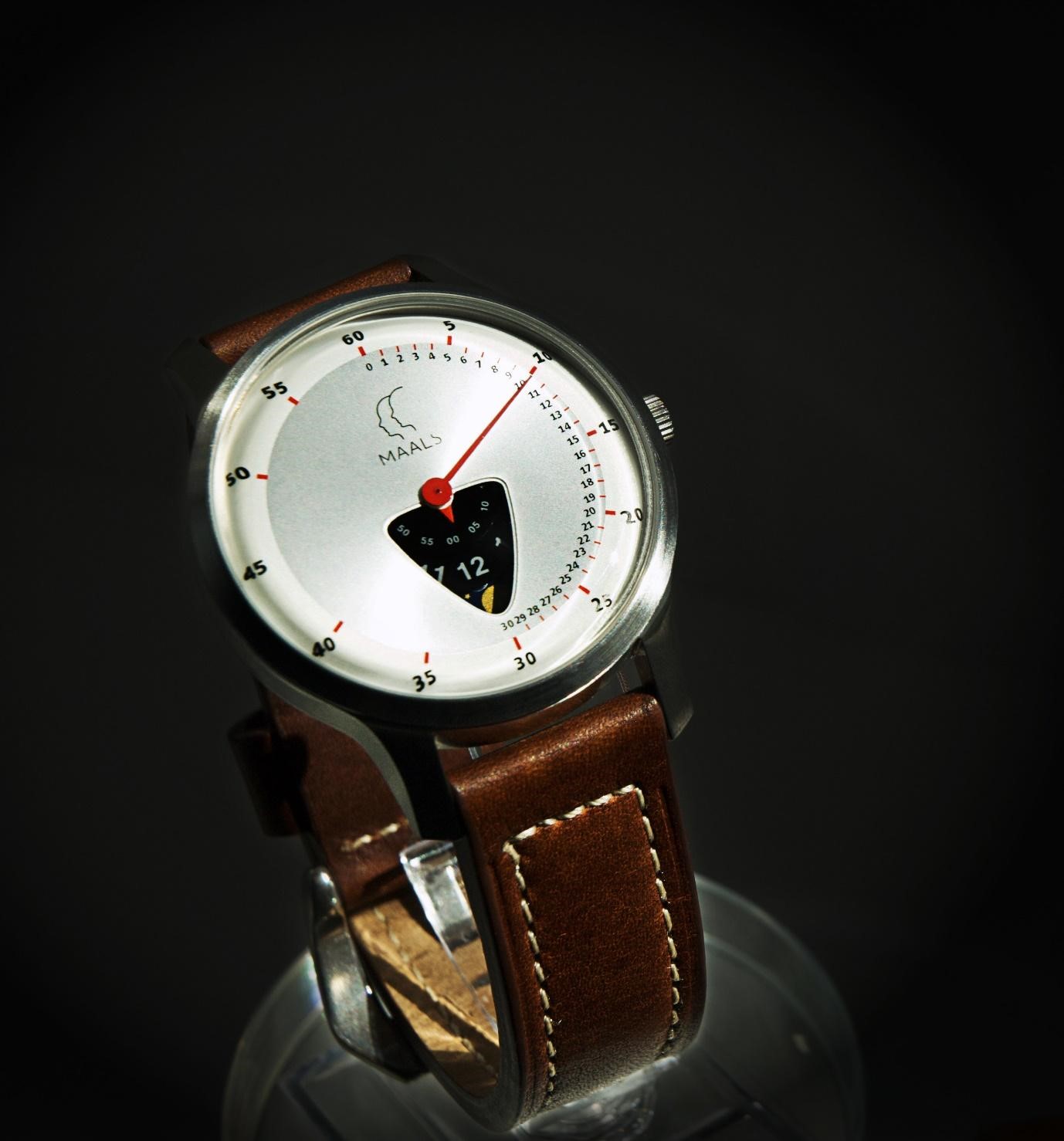 Featuring Japanese Miyota 6P24 quartz movement, the 42mm watch is a fantastic achievement for a microbrand. Indeed, it mixes well with established brands to be a very enticing choice for those seeking a highly functional and eye-catching jump hour. Among the watch’s features are a central second hand, alongside hour and minute discs.

In terms of setting the design off, the triangular opening step set above the six numeral is the undoubted star of the show. Two rotating discs sit inside the triangle and show the consistency of the movement with a very accurate moon phase element. Jump Over The Moon completes its moon cycle every 29 and a half days. 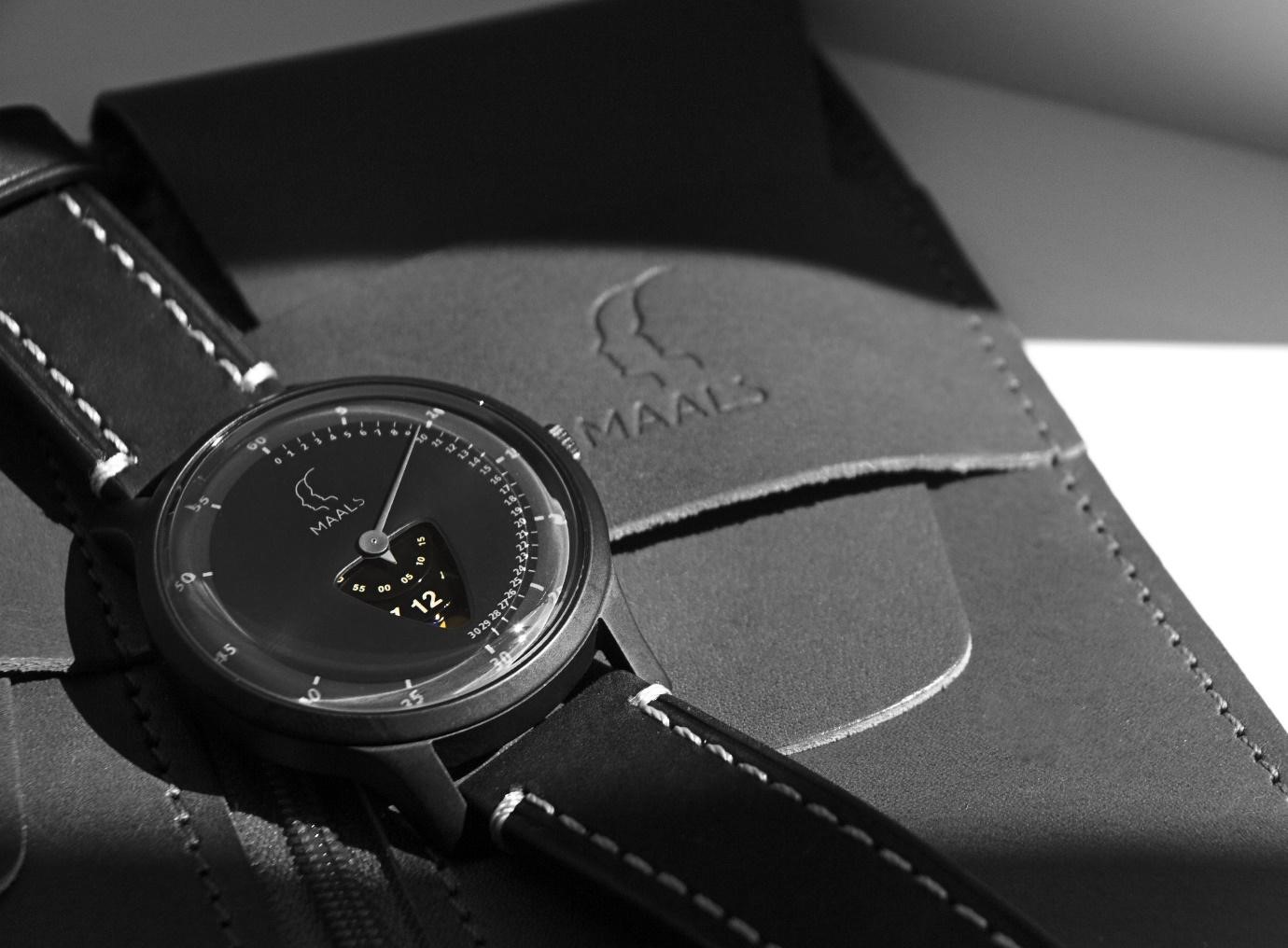 Jump Over The Moon comes with a domed back dial, and a domed mineral crystal underside with anti-reflective coating. MAALS selected a curved steel snap-on case back and a laser etched crown to complete the design.

Speaking of the case back, the company partnered with Okse (Chris Oxenbury), an artist who turned his talents to create unique and exclusive artwork for the back. Depicting an astronaut jumping over the moon, the art is beautiful to look at and also creates a talking point. Moreover, the artwork shows the distinctive touch MAALS is specializing in, and it’s something aficionados will likely love. 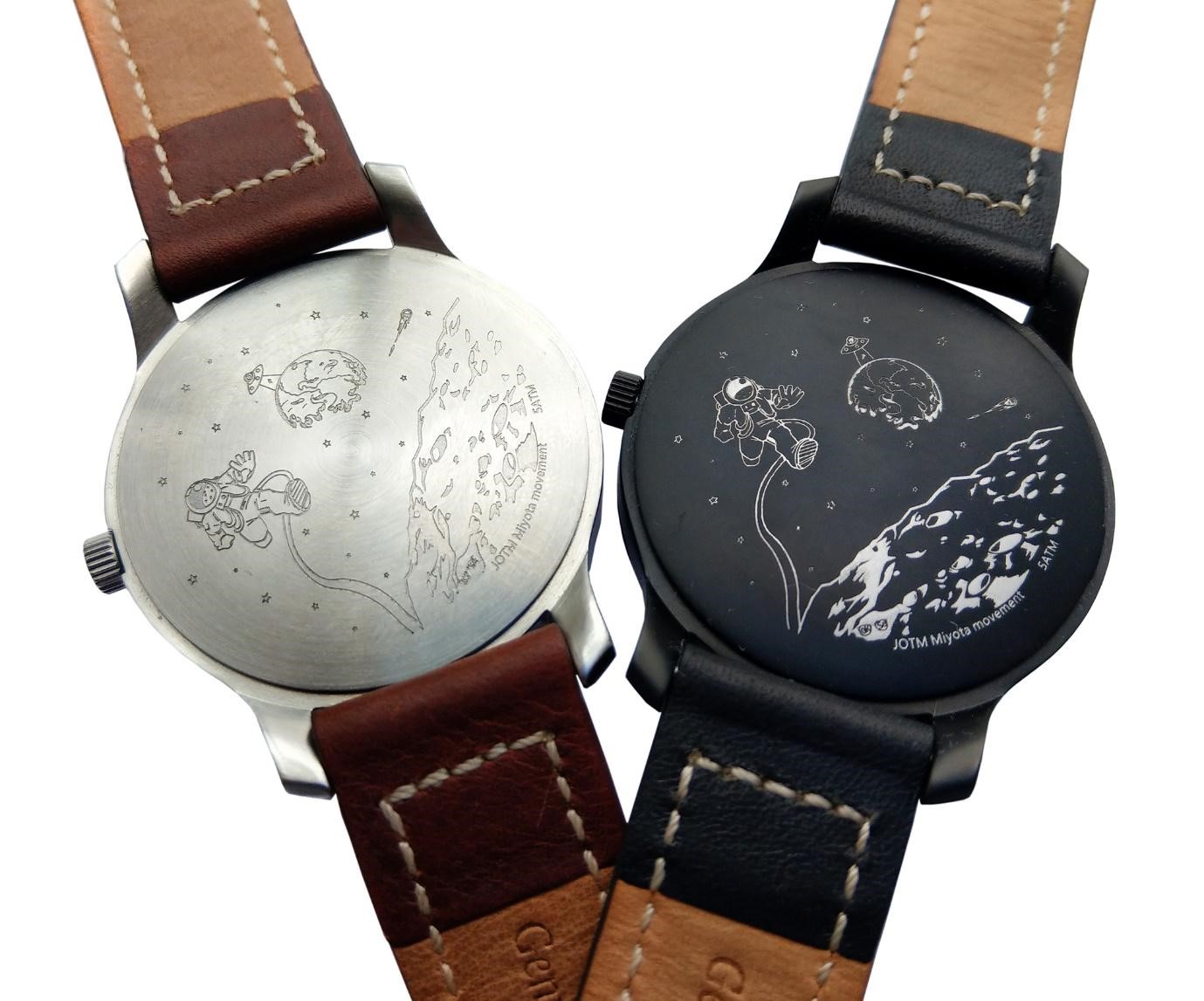 Jump Over The Moon is available in two finishes:

The Jump Over The Moon watch is available now directly from MAALS, through the company’s website. However, MAALS will also be launching an Indiegogo crowdfunding campaign on the 23rd July, allowing customers to back the company at a 35% discount for early birds while buying a unique moon phase watch.