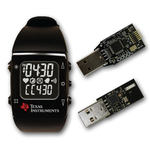 Are you a software developer who loves watches and is curious about hardware? Have you ever wanted a watch that you could hack on? If so, this might just make your day: the TI EZ430-Chronos. Produced as a promotion for the MS430 line of low-power microcontrollers from TI, it’s a $50 kit for a fully programmable sport watch: