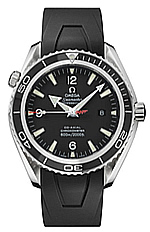 Omega and James Bond have had a long and mutually profitable relationship. It used to be a Rolex Submariner that Q modified with non-standard complications and handed over to Sean Connery to get him out of tight situations, however starting with Pierce Brosnan in Golden Eye the Omega Seamaster became the choice of British spies. Omega seized the opportunity to not only make James Bond a brand ambassador, but they also created the special James Bond Omega Seamaster.

Now that there’s a new Bond, Omega has taken the opportunity to outfit him with a new tool: the Omega Seamaster Planet Ocean. I’ve written about the Planet Ocean and handled several under the watchful eyes of jewelry store clerks, and they are truly majestic watches — very fitting of Bond, and an excellent choice for a fresh beginning of the Bond franchise.

What I find interesting, however, is that to my knowledge, Rolex never made a limited edition commemorative James Bond Submariner while Omega has released a couple Bond Seamasters. I’m guessing the idea of soldering a “007” to the end of a Submariner second hand, or adulterating the dial with some Hollywood inspired action graphic made the folks at Rolex swoon. Frankly, I’d have to be a pretty big James Bond fan to drop that kind of money on a movie souvenir, but I suppose if you’re a collector, there’s nothing like the phrase “limited edition” to get you on the phone with your favorite authorized dealer.