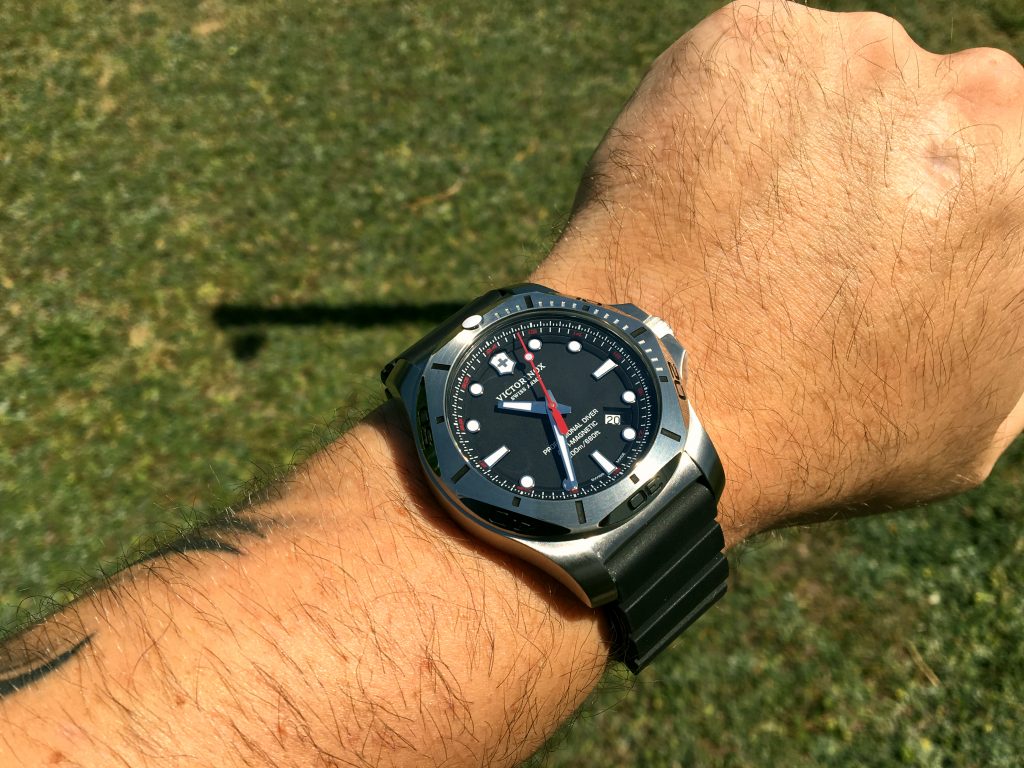 Debuting at Basel earlier this year, (along with a few other versions of the INOX), was the Victorinox Swiss Army INOX Diver. This updates the original version with an added dive bezel, and also a bump in size to 45mm. The price has stayed basically the same, so they did not go crazy with a price hike for a few added features and while overall I like the new INOX Diver, there are a few things I would have done differently. 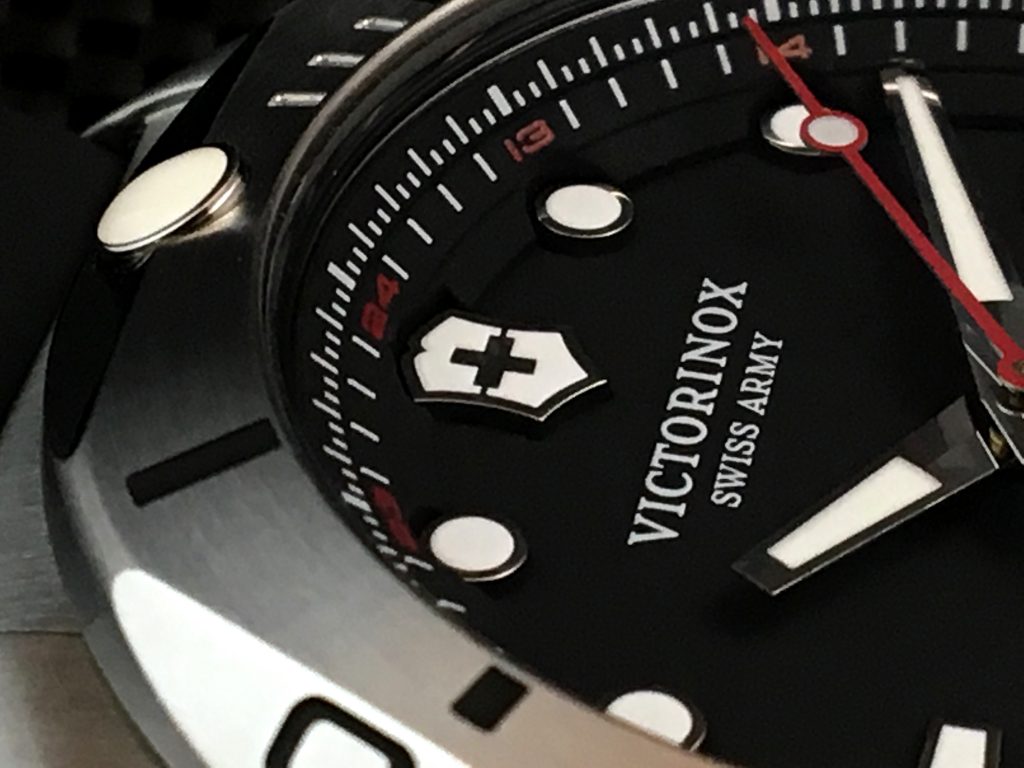 Price $505 *From First Class Watches, who provided this watch for review* 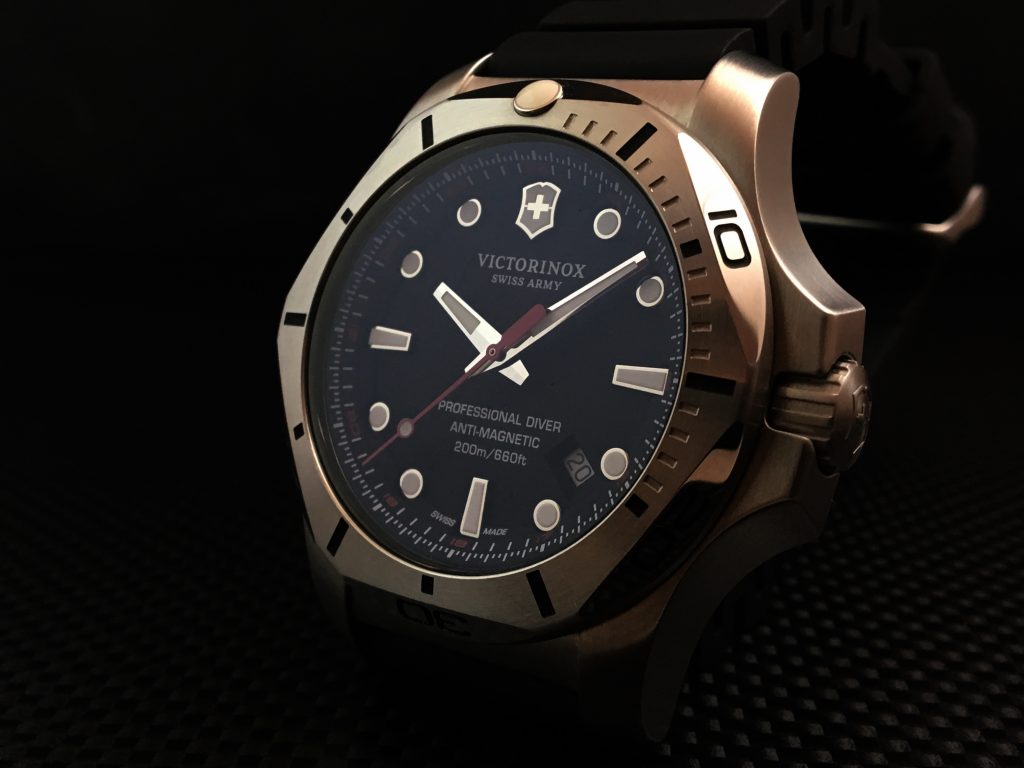 One of the reasons I enjoyed the original INOX was because of the understated, almost simple tool watch look it had. It wasn’t anything flashy, and it was something on the right strap that could be dressed up, but also a watch that was ready to go into battle so to speak. (It would still get scratched to hell, but it could withstand a lot of abuse). The Inox Diver is not different in the technical aspects and Victorinox was smart to release a diver variant of one of their most popular releases of the past few years. The biggest issue I have with it though, is the size. I do not understand why they went up to 45mm, as I felt 43mm was the perfect size. Maybe they felt adding the wide diver bezel would make the dial seem smaller, which could be the case, but man is this a chunk of a watch. There is no doubt when you pick this sucker up that the case walls are solid and thick. If lightweight watches are your thing, look elsewhere. 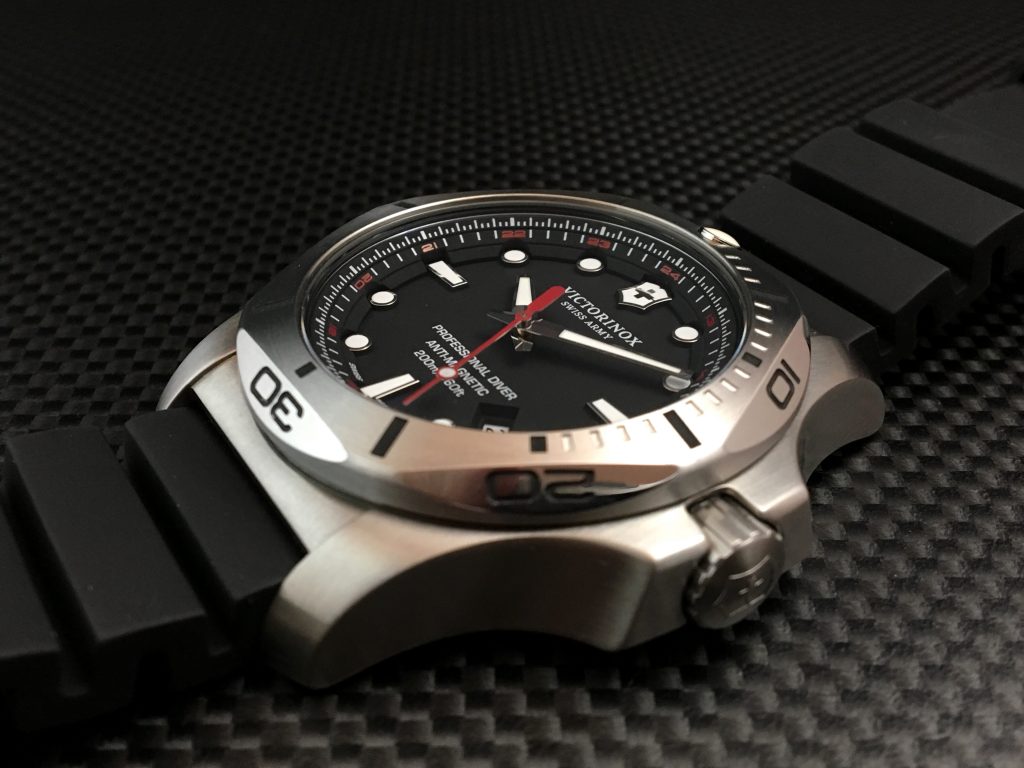 If you know the INOX, or read my review of it, you can see this is pretty much the same watch as far as design, except it has a rotating dive bezel and some extra text on the dial, along with slight applied marker changes (round makers added instead of all rectangle). With that said, I am not going to go over all the aspects again, as it would be redundant. The bezel is almost exact to the originals fixed bezel, with its beveled edges. At first I did not like this aspect at all, and wished they went with a more traditional dive bezel. Looking back at my review, I realized if they did that, it would take away one of the key aspects to what makes this simple and rugged watch stand out. The issue though, is that the the numbers on the bezel are not easily readable straight down. My other issue is that they could have lumed the bezel, but chose not to. While lumed bezels are for the most part a gimmick, I just think they missed the boat here. Seeing how they lumed the dial and hands though, (more on that later), it is probably best that they didn’t. 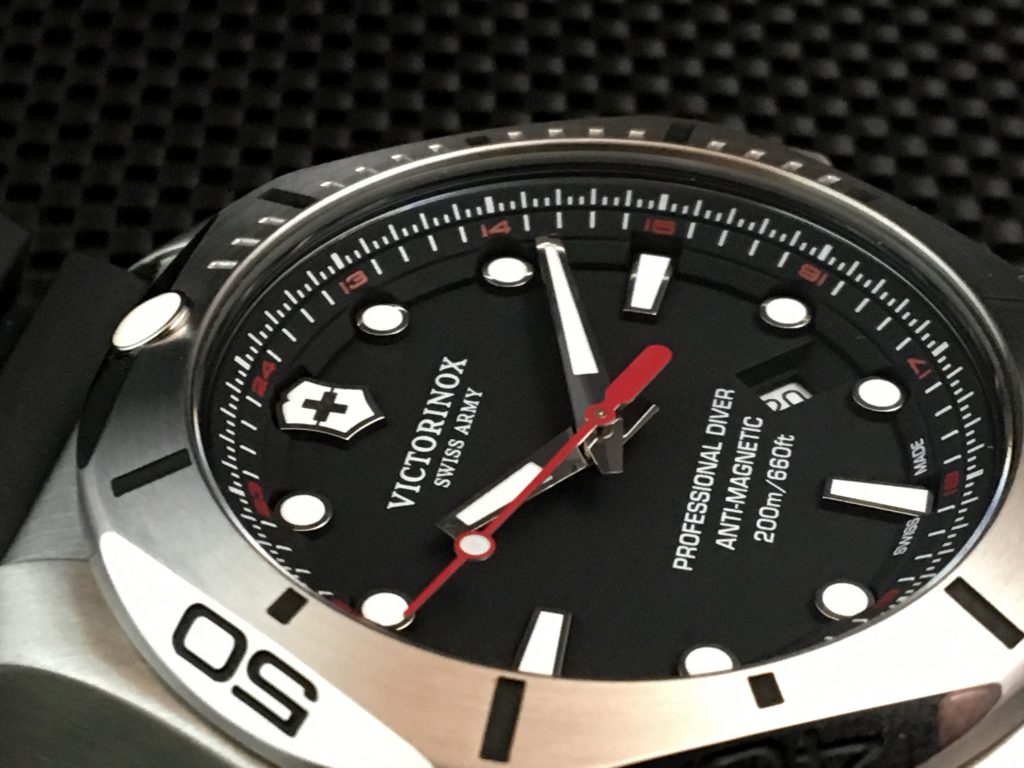 Another change is the added dial text, which is not so much an issue itself, though I did prefer the clean dial of the original. The real problem is the date cutout, which almost cuts right into the dial text. It is in the same place as the non diver INOX, but because of the added dial text, it just looks weird. I may be nitpicking, but it is the small details that make the difference in my opinion. 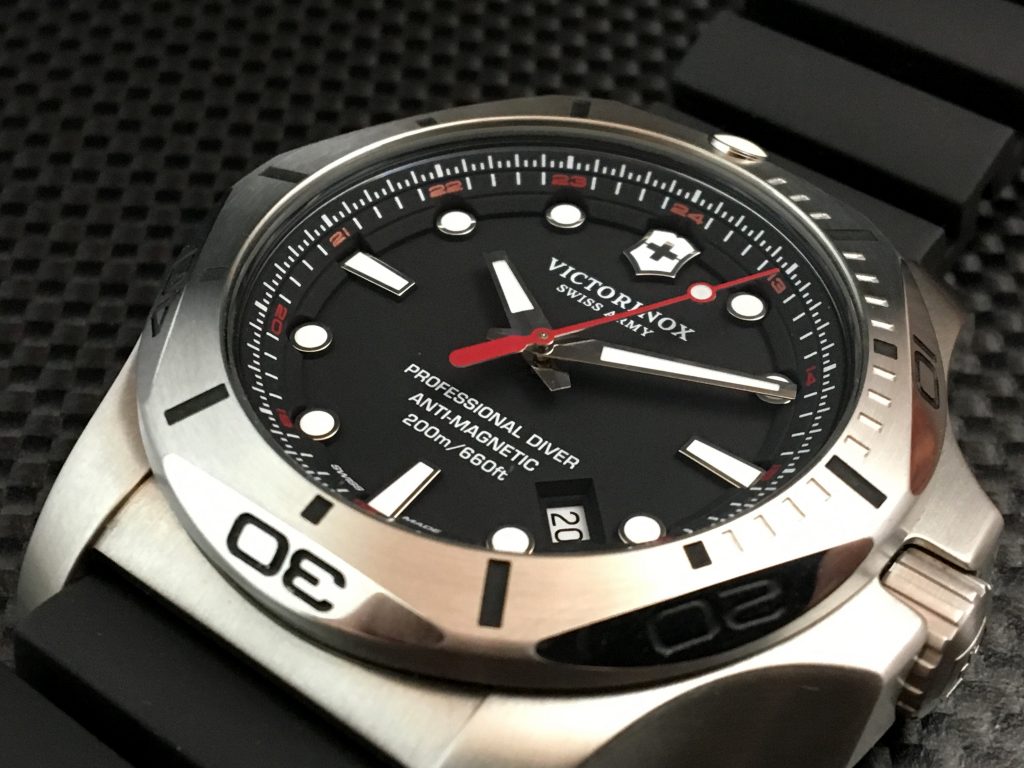 As I mentioned earlier in this review, the same thing that plagued the original, happens to be present on the INOX Diver. The lume, or the lack thereof. I am not sure why Victorinox does not apply many layers of lume on these models, especially when the watch is so well built otherwise. Please, VSA, load up on the lume! The picture below was after a one minute charge and taken in full darkness right after. In the gallery you will find a low light shot, and you will see the weak lume even more. 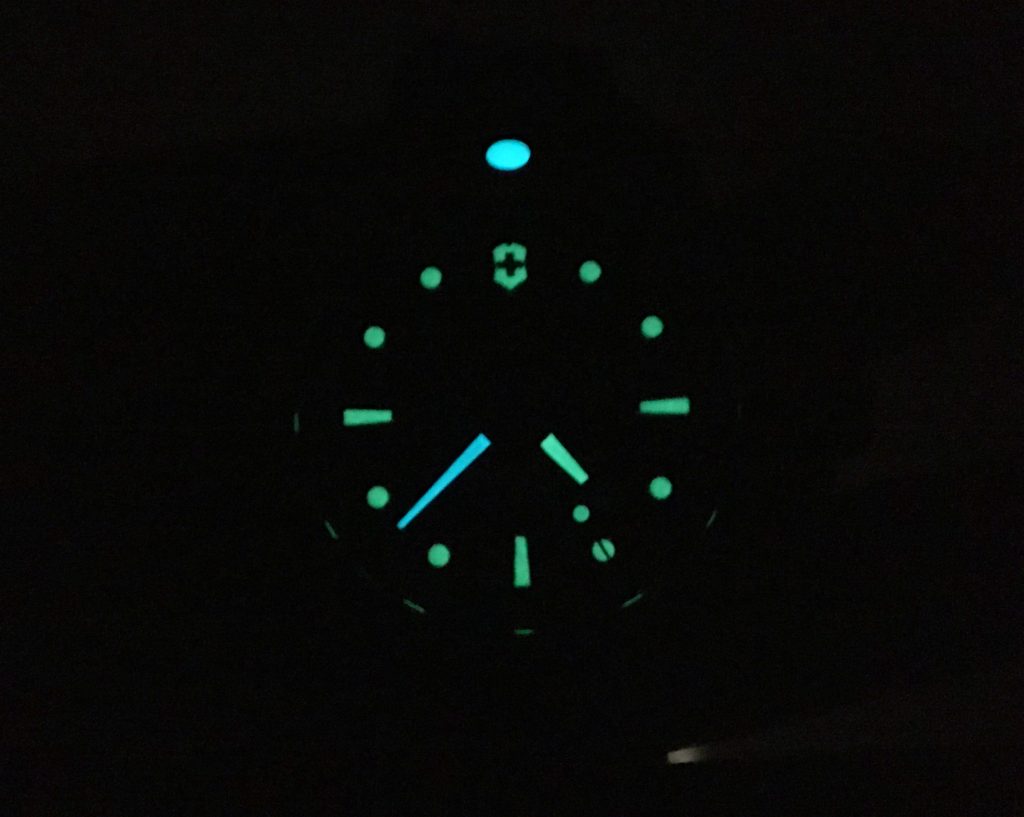 Large and chunky is good way to describe this diver, and that is how it wears on the wrist. I can pull off a large watch with my 7 1/2 inch wrist, and depending on the watch, I don’t mind, but still wish this was 43mm like the non diver. The rubber strap seems to be improved, it is not as stiff, or at least the black rubber is not as stiff as the green one I reviewed. Victorinox Swiss Army also went with a standard lug width this time around, 22mm as opposed to 21mm. 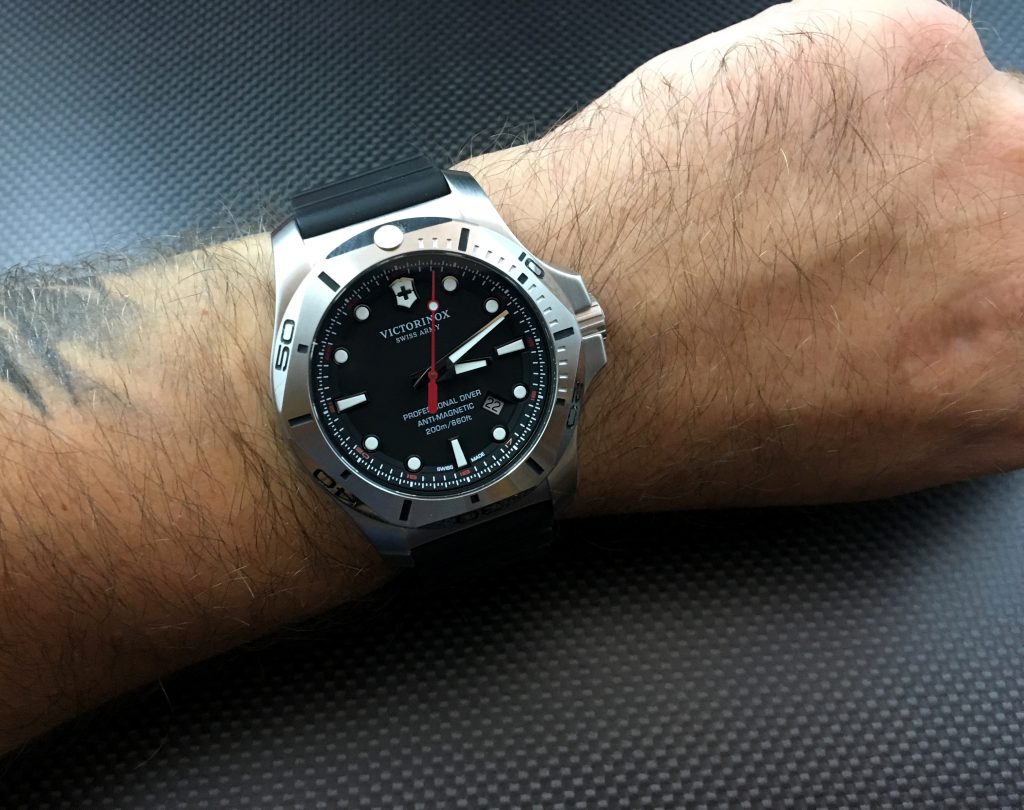 While many of us wanted a dive version of the INOX, and the Victorinox Swiss Army INOX Diver has many great qualities, as I talked about throughout this review, I just wish a few things were done differently. Overall, it is still a rugged, attractive dive watch, and it is using the same Ronda Quartz movement the original did. The crystal is of course sapphire and while I wished it was the smaller size, I am sure there are many that are happy it has been bumped up to 45mm. The crown action is as solid as a rock and well protected with the massive crown guards, and while I still do not believe all the hype with their marketing, I am sure it could take a good beating. As I said, my biggest gripe is the lume, but I have no issues with the build quality otherwise, it is up to normal VSA standards.

Thank you for reading. 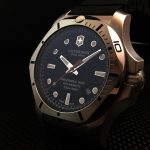 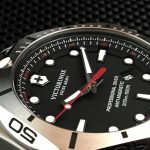 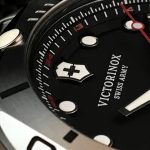 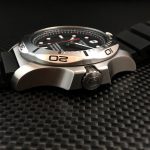 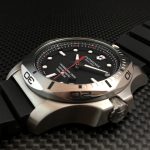 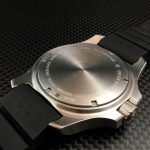 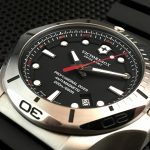 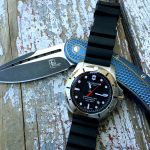 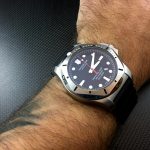 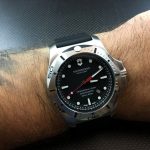 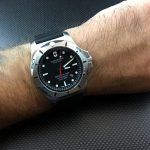 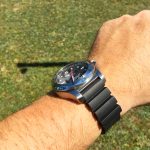 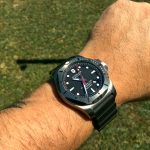 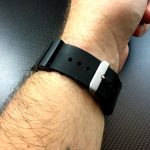 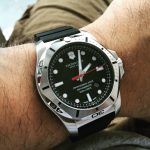 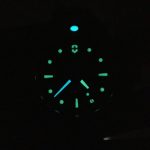 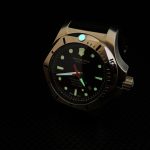