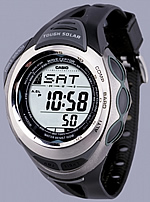 I was going to wait and write about the new Casio Pathfinder PAW1200T-7V once it was actually available, but I’ve been getting so much email about this watch that I figured I’d better go ahead and break radio silence. Last summer, I made a post entitled The Ultimate Casio Pro Trek (Almost) which described a watch I’ve been waiting for for a very long time: a solar atomic Casio Pro Trek (called Pathfinder here in the US). The “Almost” portion of the title referred to the unfortunate fact that it was only compatible with Japanese atomic clocks. Casio has finally come through for us Yanks, however, and according to this press release, the PAW1200 series will not only work with the US atomic time signal, but it will actually be sold here in the US, as well. Good for me, bad for my Japanese connection who won’t make any money off me this time.

I haven’t seen the final specifications on these watches yet, but I would expect the following features:

I have all of these features already, but unfortunately, they’re spread across multiple watches. I’ve been waiting for Casio to squeeze them all into a single timepiece for a very long time.

It looks like there will be three variations available: the PAW1200T-7V with a titanium bracelet for $380, the PAW1200-1V with a black resin strap for $300, and the PAW1200-3V in green resin, also for $300. These prices are MSRP, so expect to pay a little less after discounts. I expect them to be in stores and online in March, but I don’t know for sure. I will post here as soon as I have confirmation that they’re available.