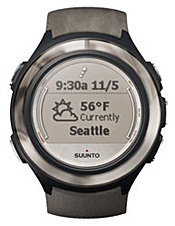 It looks like Suunto has shifted their focus slightly with the new n3i. The n3i is a modest redesign of the n3, and my feeling is that they have shifted their target market slightly toward the business user. The two primary differences between the n3 and the n3i are the size and color of the watch. Both are noticeably more conservative in the newer model. The n3i is 3mm thinner than its predecessor which allows it to more easily slip beneath a starched cuff. It is also silver and gray with stainless steel buttons, giving it a lower-key, more mature look. Here’s a comprehensive breakdown of the changes:

It’s good to see Suunto still investing in MSN Direct technology, and to see the technology evolving in a positive direction. I only hope Suunto is still planning on launching the rumored n6 this year (MSN Direct technology combined with an altimeter, barometer, heart rate monitor, and possibly a thermometer — more as the story unfolds). We will just have to wait and see what’s on the horizon.