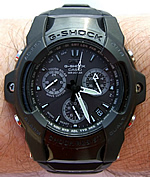 We first mentioned the Casio Giez 1000BJ almost a year ago, but we didn’t have much to say other than its very cool looking, it’s only available in Japan, and its insides are almost identical to the Oceanus 5 Motor (OCW600TDA-1AV). Now that I actually own one, however, I can finally give you a proper review.

The biggest difference in functionality between the Oceanus and the Casio G-Shock Giez is the fact that the Giez is not a worldwide atomic watch. In other words, the Giez 1000BJ only receives atomic time signals in Japan and the US — not in the UK and Germany like the Oceanus.

There are a few more obvious differences, as well. The style of the Giez is pure G-Shock with ion-plated black metal clad in durable black rubber. It’s a very functional looking watch, and with the white hands over the black face, it’s quite legible, as well. Casio muted the usual G-Shock promotion with the bezel lettering simply inset rather than painted; the result is a much more restrained look than your average G-shock.

Personally, I’m a big fan of tough analog watches, and I was really looking forward to this one. Not only does it have the legendary toughness of the Casio G-Shock family, but it’s solar, atomic, and it even manages to pack in five motors. Shock-proofing motors is a lot harder than it sounds, and this watch represents an impressive technical achievement for Casio.

After wearing the Casio G-Shock Giez for some time, I’m still pretty fond of it. It’s not my favorite day-to-day timepiece, but it’s durable and legible as advertised. My short list of issues include:

On the plus side, it’s a fantastic looking watch, super tough, very comfortable on the wrist, syncs easily (at least from from San Diego where I live), and is an excellent watch for times when you want a functional and attractive beater.