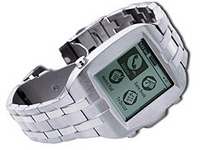 Hopefully Fossil is serious this time about their new Wrist PDA: a full Palm OS (4.1) built right into a watch. Actually, I’m sure they were quite serious the first time they announced the Wrist PDA and took “Best of COMDEX” in the mobile devices category nearly two years, though it seems circumstances conspired against Fossil, and the watch disappeared from their site as suddenly as it had appeared. I believe Amazon had even started taking pre-orders, though presumably, everyone’s money was safely returned, and I’m sure there were no hard feelings.

Don’t worry, Fossil — I’m not writing this to accuse you of false promises and vaporware. On the contrary. I’m writing this to congratulate you on getting the project back on track. I believe it’s in everyone’s best interest that bleeding edge devices like the Fossil Wrist PDA not be released until they are ready, and I also believe this product is no less impressive and relevant now than it was when it was originally announced. In other words, I’m still dying to have one.

Features and specs of the Fossil Wrist PDA:

So hopefully the wait is finally almost over. As soon as I can get my hands on one, you can be sure I’ll post a detailed review.