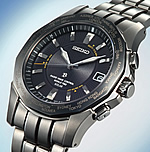 If you’re a regular Watch Report reader, you know how much I love the combination of atomic and solar, which usually means Casio. It looks like Seiko is getting serious about their atomic solar collections, however, and has announced the first atomic watch which works worldwide. Of course, “worldwide” means wherever there is an atomic clock, which is Japan (Fukushima and Kyushu), Germany (Frankfurt), and the US (Fort Collins, Colorado). In contrast, the atomic Casios I have only work in Japan and the US (and unfortunately, Casio makes plenty that only work in Japan).

Initially, the watches will be additions to the Seiko Brightz line, which I love. Features will include:

Seiko plans to start making these watches available in Japan in September of this year, and then in Europe at some point in the future. Yes, the US is conspicuously missing from their plans, but don’t worry — once they’re available, I will most definitely get my hands on one (I already have a trip to Asia planned for November), and I’ll be sure to post a couple reliable sources.

Update (9/3/2005): I’ve received a lot of email about this post (there seems to be a lot of excitement about this watch) along with the following corrections and additional information: