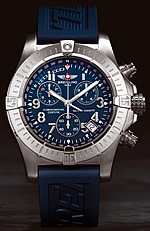 Breitling’s newest watch to come out of Basel this year is the Avenger Seawolf Chronograph. Combining the versatility and reliability of the Avenger line with the water resistance of the Seawolf, Breitling seems to be getting as serious about diving as they are about aviation.

Breitling is touting the new Avenger Seawolf as the worlds only chronograph to be water tight and operational at depths up to 1,000 meters (3300 feet). This is impressive, but not entirely true. The Sinn U1000 also has the ability to remain operational at the same depths as the Breitling, but that just means they are in good company.

Breitling has developed new proprietary technology that makes their calibre 73 SuperQuartz operational at extreme depths. By using magnetically activated pushers, the pushpieces can be activated through the case with no direct contact with the module inside, keeping the watch perfectly sealed. The SuperQuartz movement is also thermo compensated which means it can account for the changes in temperature that make most quartz modules lose or gain time. The result is that the Avenger Seawolf is some ten times more accurate then a standard quartz movement.

In addition to the standard chronograph feature, the Breitling Avenger Seawolf has a “regatta timer” that will measure in ten minute scales for the beginning of a yacht race. The case is brushed stainless steel, and incorporates a helium release valve for extreme saturation diving, and a sapphire crystal.

Being a diehard Breitling fan, I really think they have a winner on their hands as this piece is gorgeous, functional, understated, and impenetrable.