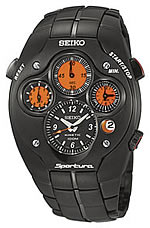 Remember the Seiko Sportura SLQ017? It’s one of the new limited edition Kinetic Sporturas. Apparently there were only 1,500 made, and only 400 of those were shipped to the US.

Well, if you missed out on the SLQ017, Seiko just announced the new SLQ019. As far as I can tell, it’s identical to the SLQ017, but in carbonized titanium, and with orange subdials. In my opinion, the SLQ019 is one tough looking watch. I’ve seen the SLQ017 in person, and thought at the time that it was probably the coolest of Seiko’s Kinetic line, however I think the SLQ019 is even more compelling. It’s sort of the Darth Vader of Seiko’s Kinetic lineup. It seems to retail for just under $4,000, however Seiko’s are typically discounted 20-25%, so I would expect to pay about $3,000. It looks like it comes with a tool for resizing the bracelet, and an interchangeable leather strap, as well. Nice touch.