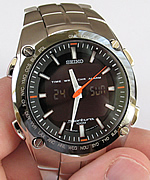 With its impressive world time functions, the SNJ005 is the Sportura for the world traveler. It stands out among its three brothers because it is the only Sportura that is digital as well as analog. It manages to retain its family resemblance, however, thanks to the inverted LCD (white on black rather than black on white) which blends in almost perfectly with the rest of the face and gives it the same jet-black dial as the other Sporturas. And like the rest of the line, the SNJ005 is all stainless steel with a sapphire crystal, screwdown caseback, and double locking clasp.

Features of the Seiko SNJ005 include:

The SNJ005’s world time feature is probably its primary appeal. It allows you to easily check the time in one of 28 different cities, and to watch two time zones simultaneously. I really like the way you select cities with the SNJ005, as well. All 28 cities are abbreviated around the bezel of the watch starting with GMT at the 12 o’clock position, and whenever you are prompted to select a city (in time set mode, world time mode, and world alarm mode), you press a button to advance the second hand until it points to the desired city. In case you’re not sure what the abbreviation stands for, the full name of the city scrolls across the top LCD.

The SNJ005’s time transfer function is a natural fit with world time mode. If you want to quickly reset the main time of the watch to a different time zone, just navigate to world time mode, select the desired city, hold down the upper left-hand button for two seconds, and the current time in that city is “transferred” to the main time. Not only can you easily track the time in multiple cities, but you can very easily reconfigure the watch’s main time, then change it back once you’ve returned home.

The alarm on the SNJ005 allows you to specify a city in addition to a time. Let’s say, for instance, you need to know when it’s 11:00 AM in Tokyo. Rather than figuring out the time difference and setting your alarm relative to local time, you can actually set the alarm for 11:00 AM and specify Tokyo as the city. Very slick. The 20-second tone is nice and loud, and sounds a little like a cell phone ringing which is much more distinctive than the typical lame beeps most digital watches emit. (Note that you can sample the alarm in time mode by holding down the two buttons on the right. Note also that pressing the two buttons on the right toggles button tones on and off.)

Although the SNJ005 contains some fairly complex world time functionality, it’s actually not difficult to set. You can either synchronize the analog and digital readouts, or you can intentionally set them to different times if you want to be able to see two time zones at once (which you can already do with this watch, so I wouldn’t recommend it). Once it’s set, you won’t have to worry about it for a long time since all the world time offsets are preprogrammed, as well as daylight savings and the watch’s calendar. And since Seiko is known for their extremely accurate quartz movements, you really can set it and forget it.

The second thing I don’t like about the SNJ005 actually has more to do with something I don’t like about me, and that is my skinny wrists. The SNJ005 is too large for my wrist. I don’t mean that it simply overpowers my wrist because it actually doesn’t. What I mean is that it literally overshoots my wrist on both the top and the bottom so there’s a noticeable”crease” in the bracelet as the links turn too sharply back around the curve in my wrist. If I had just slightly thicker wrists, the flow of the links would be smoother and the issue would be completely unnoticeable. The problem is actually not the size of the watch itself, but the fact that the first link attached to each lug is not actually hinged, even though it looks like is, which essentially extends the practical size of the case by almost an entire inch. It’s a very strange design, but only something that you’d notice if your wrist is as narrow as mine. If you have skinny wrists, I highly recommend trying this watch on before actually purchasing one.

The Sportura line is one of the few very cool Seiko collections that we’re lucky enough to have easy access to in the US. In fact, three out of the four watches in the Sportura line (the SNA451, SNJ005, and the SNL015) can be found in just about any decent sized mall or jewelry store. (For an overview of the entire Sportura line, see my article entitled The New Seiko Sportura Line.) The SNJ005 retails for about $650, but is typically discounted at least 20-25%, so expect to pay between $480 and $520, or even less.

If you’re a frequent traveler, and your wrists are big enough to accommodate the SNJ005, you can’t go wrong with this timepiece.