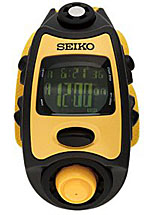 I was in New York for a conference last week, and I ran into a girl wearing a big, dorky (in a cool way), very intriguing watch which turned out to be a Seiko AirPro. I’d never seen one before, and when she told me she’d bought it in Japan, my first thought was that it was a GSM mobile phone watch that had somehow slipped passed my Japanese wrist tech
nology radar. But instead of being a speaker or a microphone, the big contraption below the face is actually a pump which can be used to inflate a small chamber under the case to make the watch fit snuggly against your wrist, kind of like the old Nike and Reebok basketball shoes. I’m not exactly sure why it’s useful (the girl wearing it was a designer,
and I think she was more attracted to its unique looks than its functionality), but I suppose if you were running, or playing tennis, or otherwise engaged in the type of activity that would send your watch bouncing up and down your arm, it might be nice to cinch it down by pumping a little air into it.

I can’t explain why, but for some reason, I liked the watch enough to do a bit of research. I don’t know if Seiko is still making the AirPro, but I do know for a fact you won’t find one at your local authorized Seiko retailer. I found references to the Seiko AirPro as early at August of 1999, so we’re definitely talking vintage technology here. I even found references to a version which actually spoke the time which I’m sure wouldn’t get old for your co-workers and cube-mates at all.

Features of the Seiko AirPro include:

If you feel like you just have to have one of these vintage gems, I’ve seen a few
crop up on eBay.