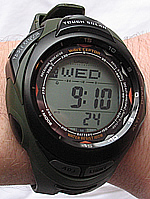 I’ve been waiting for this watch for a while now, so it’s a real pleasure to finally have the opportunity to review it. The Casio Pathfinder PAW1200 is what I’ve referred to several times as the ultimate Pathfinder, perhaps the ultimate Casio, and certainly one of the most advanced digital timepieces in the world.

What makes the Casio Pathfinder PAW1200 series special is the fact that it brings so many features together into one watch. I’ll get into plenty of detail on each individual feature shortly, but most notably, the PAW1200 series is the first to bring together the triple-sensor functionality of the Pathfinder line (compass, barometer, and thermometer), atomic time calibration, and solar power. I have several solar-powered watches, several atomic watches, and a few triple-sensor watches by various manufacturers, but the PAW1200 is the only watch that I know of with all of these features. And as if that isn’t enough, the PAW1200 series is what Casio calls a multi-band atomic watch, which means it will calibrated with almost every atomic clock in the world (details below).

Ok, now for a feature breakdown:

The Casio Pathfinder PAW100-3V has definitely become a favorite among my many Casios. I love all the features, naturally, but there’s more to love about this watch than just what it can do for you. Although it’s not exactly a subtle timepiece, I think Casio did an excellent job on the design. It sits very comfortably on my wrist, and does not feel nearly as large as it is. All the buttons are well placed, big, easily accessible, and provide just the right amount of feedback. The sensors in the watch, which are located on the top left-hand side of the case, are inconspicuous, and reasonably well contained. The contour of the watch works both for my skinny wrist, and on some larger wrists I strapped it to for ergonomic testing. The resin strap is thick and sturdy, but soft and malleable, and it uses this new double pin system which I love the look of (two pins are used in the buckle rather than one). And finally, I just can’t believe that Casio actually squeezed all this functionality into a single watch, all powered by the sun.

The entire PAW1200 line will be available later this month from Casio’s site, and from select retailers like JC Penney.