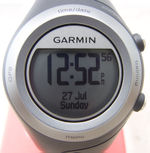 Up for review today is the Garmin ForeRunner 405, a sophisticated GPS training watch. This one has some new and interesting features both in design and use, so kick back for a long, detailed review.

To get us started, here’s a quick feature list of the 405:

The 405 is available in two colors: the black/grey shown here, and also a greenish colored version I’ve not seen in person. Considering the technology packed inside it, the watch is remarkably clean in appearance which helps reduce the apparent size when worn. Garmin was able to reduce the physical buttons to only two by using something we’ve previously only seen on Tissot watches – touch sensing. Unlike the T-Touch watches, the Garmin has a metal bezel that serves as the touch surface instead of the screen itself.

In practice, you press a button to activate the touch sensor and use the four cardinal points of the bezel to move forward and back, and also scroll up or down by dragging a finger around the bezel in a circle; gestures familiar to anyone with an iPod. While it takes a little getting used to, the interface is quite natural.

When you flip the watch over, you can see the two metal contacts where the charger clips on, and also that the watch actually extends into part of the band where the antenna is concealed.

On the right is a picture of what you get in the box, including charger, cable and “it looks like a memory stick but isn’t” Ant+ transceiver:

(As a humorous aside, I managed to lose the Ant+ stick, and had to pay $50 for a replacement. At first, I thought that Garmin had taken the leap of including a memory stick with software on it; that’ll teach me to pay more attention!)

Once you activate the GPS, you get a screen showing satellite strength, just like any other handheld Garmin:

As you’d expect from a GPS training watch, the 405 has a SiRF-based multichannel receiver, locks on in less than 45 seconds, and is extremely accurate. The antenna is actually situated on the wrist, under a skin of plastic, and proved reliable even while walking and in urban environments. For those times when you’re running indoors, you can buy the foot pod and it’ll automatically use that data instead.

Once you have a lock and start it going, you see this screen instead, showing time, pace and distance:

Using the included software, you can define all sorts of workouts to download to the watch, and have it alert you if you’re over and under your pace. In combination with the optional sensors, I can easily see the 405 being the tool of choice for really hard-core runners. Unfortunately, I’m not, so my review of this is necessarily a bit lacking. I did try it out, though, so I do have some data to show you.

For this test, I captured an urban walk in San Diego. The first two pictures are from the Garmin software, which, while it lacks fancy graphics, excels at data analysis. Here’s their map view: 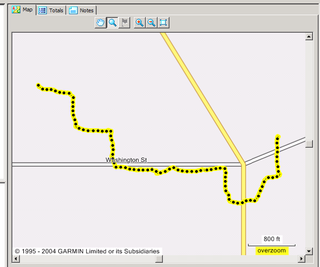 And here’s their customizable graph window beneath it, showing speed on one axis and elevation on the other:

There are also text displays and analysis tools galore; as I said this is really designed for the serious runner. You can also view the data in Google Earth via a menu selection, a very nice touch:

Here I’ve zoomed into the only place on the route with bad data, a short section where I walked between two six-story-plus buildings that blocked its view of the sky: 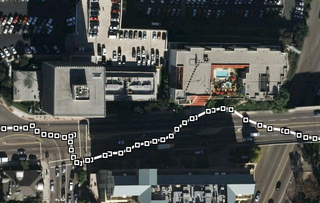 I was on the south side of the street, so you can see my position drifted north until the view returned. I should also note that I ran both the Garmin software and Google Earth under VMWare Fusion on my Mac laptop with no problems, as native Garmin support for this model is not complete as of this review. Garmin has a central page of Macintosh software and support, which is quite nice of them.

From those pictures, you can see just how much data the 405 is capturing: It’s quite amazing, really. I also really like that you don’t have to cable it up to download data: just walk within range of your PC running the Ant+ agent and voila! Data downloaded. A lot of work undoubtedly went into that feature, and the result is quite convenient to use.

If you want to look at the data yourself, I’ve uploaded a copy of the KMZ file to my webserver here. (25KB)

Wearing the 405 is pretty comfortable although it stands above the wrist quite a bit, and due to the rigid shape, it’s not something you’d wear for long periods of time. 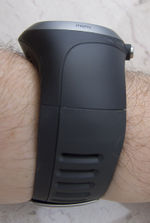 It’s probably the most stylish GPS watch I’ve seen, though. Up close the bitmapped display and white LED backlights give it away, but overall its pretty unobtrusive. The high-contrast LCD and large font make reading the display quite easy, even when you’re jogging.

The Garmin software and website allow you to do all sorts of advanced training, including features like sharing workouts, exercise versus a remote or virtual competitor, pace alerts, etc, etc. It’s quite the training system, especially when you consider the price.

MSRP of the ForeRunner is $300, and they’re available online for slightly less. Adding the heart rate monitor is another $50, the bike sensor is $60, and the foot pod is $110.

Overall I was extremely impressed with the 405. As an exercise system I’ve seen nothing even close, and the cost is quite reasonable for what it does. The touch bezel and wireless interface are more advanced than the Suunto X9i, and the improved GPS reception is pretty darn good.