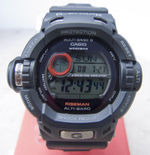 The Casio Riseman GW-9200 is a bit tricky to review, mostly because Christian already wrote a pretty complete post about it already. It’s also a bit of a hybrid watch, something of a merger between the worlds of the G-Shock and Pathfinder lines. I’ll dive into feature lists after the break, but a short summary is this: Metric units only, and no compass.

Like many of Casio’s recent models, this Riseman is solar-powered and radio-set. As Christian noted, it ups the ante by adding the ability to sync to the Chinese radio signal, an excellent addition. Until GPS chipsets drop another order of magnitude in power consumption, radio-set (Often marketed slightly misleadingly as “atomic time”) is the best available technology for automatically setting a wristwatch. There are still big portions of the world where signals are not yet available (Australia, Africa, South America) so know that this Casio will remain accurate within 15 seconds per month even if no signal arrives.

If you want to dive into the details, I recommend as always reading the manual for the movement. The Riseman has a Casio 3145, whose manual is here (PDF format).

Physically, the watch is similar in size to other G-Shocks and outdoor watches. Here’s a comparison picture next to the Suunto Core: 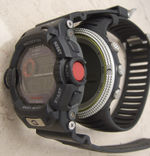 As you can see, it’s a little narrower in width and a bit thicker in height. As with every other G-Shock I’ve worn, it’s light, comfortable and stays in place. I like that the ‘G’ button at six o’clock is for the backlight; very easy to locate by touch.

The integrated strap has a double row of holes for the dual-toothed thorn buckle. There’s also a small bump at the end of the strap to keep the keeper in place. Both are the sort of inexpensive, thoughtful design touches that we have come to expect and enjoy from Casio. 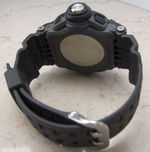 The feature that I enjoy the most about this Riseman is the default time display. Without seeming cluttered, you see

There are also subtle indicators for H/M/L battery charge and daylight savings time, but they stay out of the way until you look for them. Having all of that present with no button pressing is something I quite like in a watch, particularly high-function digital ones like the Riseman.

I wanted to bring to your attention one other typically understated Casio achievement: The pressure sensor, shown here in closeup:

It’s the stainless steel cylinder inset into the left side of the watch. This is what senses barometric pressure, which it uses to calculate altitude and display, err, pressure. These are usually piezoelectric and fragile. For that reason, it’s common that watches with altimeters are usually not rated very deep under water. For example, the Suunto Core is rated to 100m (330ft), though it’s sensor can only measure depth to a tenth of that. This Casio, as with the Ultimate Pathfinder, is rated to a full 200m (660ft). You probably won’t ever need to worry about that, but it’s a nice demonstration of the engineering present here. 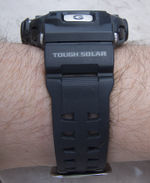 As you can see from the wrist picture, the Riseman sits nicely, with a low-profile buckle that’s quite comfortable for those of us who spend more time camped on a keyboard than in Yosemite. It might just be me, but I find that wearing an outdoors watch is a nice reminder that there is a world out there to enjoy on days when I don’t get to go outside.

Opposite the pressure sensor is an interesting design touch: 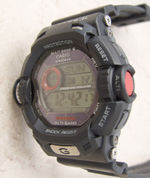 Yep, it’s a big red button, circular to match the sensor opposite instead of rectangular like the others. It’s the altimeter button, and I think that the red is there to provide visual detail and match the inset red circle on the display around the altimeter graph.

Compared to the Pathfinders, the Riseman lacks tide, moonphase and compass, but adds the sixth radio reception band. As noted, the altitude, pressure and temperature displays are only available in metric units, which ranges from OK to a showstopper depending on how you want to use it.

In altitude mode, you can select a sampling interval of either two seconds or five minutes. In the 5-second mode, it records one hour of data versus ten hours. Five second mode would be perfect for downhill skiing or mountain bike descents, while ten hour mode is well suited to hiking and other slow-change activities.

You can also display a large arrow that indicates rate of ascent or descent, which is easier to see at a glance.

In barometer mode, the Riseman measures pressure automatically every five seconds for three minutes, while the upper-left graph shows pressure readings taken every two hours for longer-term trends. As with every other watch, the temperature readings are inaccurate while worn and become correct after 20 minutes off the wrist. It might be useful strapped on the outside of a coat or wetsuit, though. One other nice feature of this mode is that, instead of a graph, you can have it display a large arrow showing the trend for the last two hours – easier to read and interpret.

Alarm mode is what you’d expect, though now you have four regular alarms plus one with a seven-minute snooze function. Nice for traveling, that. Stopwatch also does what you expect, and can also save first/second times, which is nice for timing more than one finisher in a race.

Other notes – the countdown timer is a full 24 hours (nice!), the backlight is the preferred electroluminescent that evenly lights the entire face, and the no-light battery life is an impressive 20 months. With a street price of about $260, it’s hard to find much to dislike about the Riseman. When a friend of mine needed to borrow a watch for a quick trip to a combat zone (he’s a medic), the Riseman is the one I loaned him.