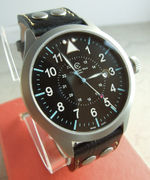 Today I’m reviewing a watch that I like a great deal: the Christopher Ward C8 Pilot, model number C8SKK. It’s a mechanical watch in the style of pilot’s watches from decades ago, updated using modern materials and the ETA 2824-2 mechanical movement. Let’s start with the specs:

Other versions are also available (white dial, brown strap, PVD case), but all share the same basics. Read on for our review. 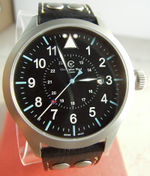 One of the great ironies of life is that technology often advances fastest in times of strife and warfare. For example, the modern pilot’s watch, as well as the entire Panerai company, were both created out of the needs of the last world war. Watches are often decorative as well as functional, so the prospect of imminent demise has a way of removing all excess and distracting elements. At the time, watches were an essential navigational component since dead reckoning requires only a compass, clock, and map. All three had to be reliable and functional. Additionally, piston engines of the time had a much higher level of vibration than do modern jets, so legibility was critical. The original watches of the time were quite large because of this, often 50mm or more, designed to be worn on long straps over an outer coat. Self-winding watches lay in the future, so they were handwound pocketwatch movements.

Iconic designs from this time came from IWC, Laco, Stowa, Wempe and Lange. You can read more about them here and here.

If you browse those links and the pictures on them, you can see the inspiration for the Christopher Ward C8 pilot here: big crown for use with gloves, upright Arabic numerals, dotted triangle at 12 o’clock, luminous hands outlined in black and an easy-to-spot second hand. There’s also the ecru-stitched black leather band with (decorative) rivets, matte-finished case (a shiny case is bad in a plane — the reflections are distracting), as well as the invisible antimagnetic case and dial. In this case, CW has updated the classic design with a few modern elements: the movement is a self-winding (automatic) ETA 2824-2, the lume is blue, they added a date window at 3 o’clock, and there’s a small window on the back to show the balance in motion.

The dimensions are changed a bit — for the better, actually. The C8 Pilot is 44mm by a slim 9.7mm. It wears incredibly comfortably because of this, and is effortless to slide under sleeves. After my usual-wear dive watch at 15mm, 9.7 is a lot more versatile and comfortable since the weight sits lower and is spread out, the watch doesn’t move nearly as much when your arm moves; less of a pendulum effect. It’s hard to explain, but if you’ve worn a heavy, tall watch, you’ll know what I mean. At 140g, this is also a very light weight watch, adding to the comfort. The thinness also means that the C8 can work as an unusual dress watch.

I’ve bought a couple of watches from Christopher Ward back in 2006, and have been meaning to do a review. On the left is a picture of the C8 behind my Malvern C5. I’m personally a big fan of the brand, which is Internet-only and is advertised via word of mouth. You can actually email Christoper Ward himself, and unlike every other watch brand that I know of, he publishes detailed design notes and specs on his website! For example, here’s a snipped from the C8 PDF: 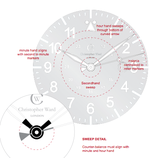 It shows how he laid out the inner portion of the dial and hands, and little details such as the hour hand sweeping over the bottom of the triangle. It’s the first time I’ve had a look at design drawings, and I find it really fascinating to see. I wish other brands would do likewise.

In another drawing, he shows how he used the shape of the Spitfire’s wing in designing the caseback:

The movement is the reliable and standard (Swiss) ETA 2824-2. In a recent change, Christopher Ward watches are now assembled in Switzerland and thus now say ‘Swiss made’ on the dial instead of the previous “Swiss mov’t”. ETA has changed their rules for their customers to require Swiss casing, and I suspect this is the cause behind the change.

The 2824-2 movement is about 28mm across, and the C8 is 44mm across, so if you look you can see signs of this – the date indicator is closer to the center of the dial, and the movement window in back shows the outside of the rotor sweep. Design purists sometimes are upset if a movement requires a spacer, but it’s completely fine with me, and really, there’s no reason to limit watch size artificially. The 2824-2 is a good timekeeper, and any competent watchmaker can service or repair it easily.

A quick search of Watch Report lists 30 instances of ‘2824’, giving you an idea of just how popular it is.

The case is non-glare brushed 316L stainless steel, as is the signed crown. The matching rivets on the strap are also brushed, lending the watch a tool-like appearance I find appealing. The only reflections are from the applied triangle at 12 o’clock and the inset metallic ring around the date window. I’m not sure why he went with the date window surround, to be honest, as it doesn’t help readability, but this is a small minus.

The crown is tapered, signed, and fluted. It’s very easy to grasp, wind, and set, but has ample clearance so as not to irritate the wrist below. Lacking crown guards, I can see a bit of risk in it getting caught and damaged on straps or similar if you’re not careful. It doesn’t screw down, though the watch still manages to be rated for 50m (150ft) of water resistance. 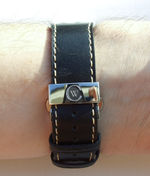 The luminosity on the watch is quite good. The blue lacks the initial intensity of, say, the Orange Monster, but remains very legible for eight hours. The numerals (in white) are not lumed, but the hands, minute markers, and triangle are. It’s easy to read, and if you look closely you’ll see that the second hand has two colors of lume on it; a nice detail to appreciate.

The strap is 22mm wide at the lugs, tapering to 20mm at the double deployant clasp. It’s thicker than usual at 4 or 5mm of signed calfskin. I’ve never seen this before on a watch, but the spring bars are quick release, meaning that you can remove the strap using only a fingernail. I’m a big fan of quick-release straps; I’ve been using them from another vendor for years now on all my watches. I’ve never had one come loose, and the ease of changing straps is wonderful. Hopefully other brands will copy the idea as well.

(You can see the quick-release catch in the above picture of the back of the watch.) Interestingly, on my 7.25″ wrist, the strap was at its smallest setting, which hints to me that this is a watch designed for the large-wristed. It’s easy to punch new holes in the strap, however; expect to do so if you have smaller wrists.

I’ve greatly enjoyed wearing this watch. Christopher Ward provided us a review unit, but if they hadn’t, I’d be buying one out my own funds, I like it that much. Highly recommended. 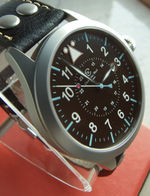 Look for a follow-up email interview with Christoper Ward himself soon on WatchReport as well.