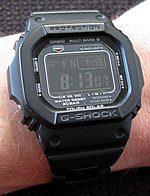 Sometimes the only way to really know how much you like a particular watch is to simply see how much you wear it. I’ve had plenty of watches which I thought I was going to love — watches with all the right features and materials — but that ended up getting almost no wrist time whatsoever for one reason or another. And then I’ve had watches which I didn’t really expect to care for all that much, but that I found myself reaching for over and over. The Casio G-Shock GW-M5600BC turned out to be the latter.

The features of the G-Shock GW-M5600BC are pretty consistent with almost every G-Shock I review:

The Casio G-Shock GW-M5600BC certainly isn’t all that much to look at which is why I never expected to become so attached to it. The case is the standard retro G-Shock square with the corners cut off and the traditional four small stainless steel buttons. It has an inverted LCD (white on black) which, on the one hand, sets it apart from most of its G-Shock siblings, but on the other, makes it more difficult to read than modules with regular LCDs. The overall look is so much that of a standard and anachronistic G-Shock that the only comment I’ve ever gotten on it was from a Rolex-wearing doctor who said something along the lines of “Wow, they still make those things?”

So what is it about the GW-M5600BC that I like so much? It has all the right features (atomic, solar, world time, etc.), and it’s much smaller and lighter than your average G-Shock which makes it more compatible with my narrow wrists. But what I like best is that it has the most unusual band I’ve ever seen on a Casio.

The bracelet is a combination of metal and hard plastic links held together with spring pins rather than the traditional pins and collars. There are several advantages to this type of band over the resin straps you usually get on a G-Shock:

Admittedly, the bracelet seemed kind of cheap when I first inspected it, but after wearing this watch on and off (mostly on) for the last six months, I’ve come to really like it. And I’m not alone. I’ve seen this G-Shock model for sale on forums without the bracelet from people who removed it to attach it to another G-Shock. Interesting idea.

The GW-M5600BC doesn’t seem to be available in the US (I was only able to find it in Casio USA’s product archives), but it is available overseas from the usual retailers. It goes for about $230 which may seem a little steep for a retro-style G-Shock, but if this watch is your kind of thing, it’s worth every penny.