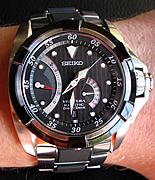 I’ve always been a big fan Seiko Kinetic watches. There’s something about generating power through physical movement that I somehow find more intriguing than a static and stationary solar cell. I like how you can hear the rotor turn, and even feel the friction that generates the power. And I like how the power reserve indicator let you know if you’ve been giving your Seiko Kinetic enough wrist time. It may sound strange, but there’s something a little more alive about a Kinetic watch than its solar or battery powered counterparts.

But now with the Kinetic Direct Drive, you can charge the capacitor directly simply by turning the driving wheel. The procedure is certainly much more natural and subtle than the martini shaking motion of the past.

The Seiko Kinetic Direct Drive takes what I love about Kinetic movements to the next level by making the charging process not just active, but actually interactive. Shortly after you start turning the drive wheel to charge the watch, the power reserve indicator jumps to life and turns into a real-time power generation indicator. It’s a bit like a Kinetic tachometer, you might say. Here’s how it works:

As you manually wind the watch, the power indicator shows you how much power you are currently generating using the grayish scale to the left and inside the total power scale. If you watch carefully, you will notice that the low point at which the hand starts will gradually begin to rise, indicating how much power you have generated thus far (every five seconds of winding generates one hour of power). There are six segments indicating up to six hours of newly generated power. When you stop winding, the power indicator drops down for four seconds to show you how much power you just generated, then it moves down to the zero position, then back up to show how much total power is in the reserve. At this point, the power indicator hand is using the total power scale (from zero to one month). It sounds complicated, but once you understand it and see it work, it’s pretty intuitive, and even a little addictive.

Seiko seems to be well aware of the effect Kinetic movements have on us as they refer to their new Direct Drive as “emotional technology”. The Kinetic Direct Drive is more like building your own fire as opposed to flipping a switch on a natural gas fireplace. It’s a bit more work, but something about it makes it a bit more satisfying, as well. Playing a direct role in keeping your watch happily running gives us watch aficionados a great excuse to spend more time playing with the things we love.

Features of the Seiko Velatura SRH005 include:

The Seiko Velatura line is designed to be a marine and yachting collection. While two Velaturas have yachting timers (the SPC005 and the SPC007), the affiliation of the SRH005 to the world of yachting is a bit more indirect. The movement can be wound without pulling out the crown which keeps the internals of the watch safe from moisture. Additionally, the bezel screws, crown guards, caseback, and the elegant design of the dial are all reminiscent of yachting instruments.

So far, I have found that people are either drawn to the unique bracelet design of the SRH005, or they don’t care for it. Personally, I love it. I love distinguishing and unique watches, and the black urethane that covers the center links of the bracelet really make it stand out. Maybe it’s the suggestion of a checkered pattern or a racing stripe, but it also somehow conveys the sense of speed to me.

This watch was generously provided by Fashion Time.