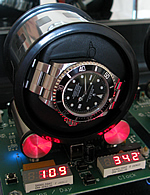 The Orbita Tourbillon is the Porsche of watch winders. It’s modern, sleek, sexy, and it ain’t cheap. But for the enthusiast who wants the best for his watches, the Orbita will keep them running with both style and precision.

The Orbita Tourbillon looks a little like a bomb from a Die Hard movie with its exposed circuitry and extremely bright LEDs. The chassis is made from four 10mm thick pieces of glass joined together by clear epoxy. Inside, three circuit boards are screwed in place and support two fantastically bright LEDs, and two stainless steel rollers. On top of the rollers rests the barrels inside of which your well wound and precisely rotated automatic watches are tucked, wrapped snuggly around self-conforming foam cushions. Although the barrels are stainless steel, they are lined with soft and gentle plastic which won’t scratch your steel, gold, or platinum bracelets, and the rollers have rubber gaskets for securely and quietly gripping and turning the barrels.

Each circuit board contains two LED readouts. The one on the left tells you how many times the watch has been turned, and resets itself automatically at midnight. The LED on the right is actually a highly accurate quartz clock which makes perfect sense as it allows you to calibrate your less accurate automatic watch as you’re putting it on in the morning. Bright blue LEDs are soldered below the circuit boards and flash in configurable patterns to draw even more attention to this modern piece of functional industrial art.

Each winder is individually programmable for 650, 800, 950, or 1300 turns per day (all my watches are happy with the lowest setting), and can be individually configured to turn clockwise or counterclockwise. The circuit boards are daisy-chained so that all three run from a single power source which is an AC adapter with a 6 foot cord.

It’s important to note that the point of the Orbita Tourbillon isn’t just to appear high-tech and fancy. It actually is high-tech and fancy. In addition to keeping your watches wound, the Orbita Tourbillon will also to rotate them in such a way as to offset the negative effects of gravity. Just as the tourbillon complication is designed to rotate a watch’s escapement in order to counteract the forces of gravity and keep the movement functioning more regularly, with every turn, the Orbita Tourbillon positions your watches at a 30° offset from the previous turn. In other words, rather than rotating 360°, the barrel is rotated 390° which means that every 12 turns, the watch has had the opportunity to rest at a slightly different angle, averaging out the tiny variations in accuracy caused by gravitational forces over time.

The Orbita Tourbillon is a substantial piece of precision technology, and I was curious to see how it would survive the shipping process. I discovered that the packaging of the Tourbillon is almost as complex as the winder itself, allowing it to arrive perfectly sound. After getting it assembled and set up, you may find you have left a few unsightly fingerprints which are easily removed with a small amount of glass cleaner on a lint-free cloth. Over time, the Tourbillon will accumulate a light layer of dust in areas you can’t easily wipe clean. I found that compressed air is the easiest, fastest, and safest way to keep it looking brand new.

Before I got the Orbita Tourbillon, I was using an inexpensive Chinese-made re-branded device which got the job done, but wasn’t much to look at, and was loud enough that I had to keep it tucked away in a remote corner of my office. The Orbita Tourbillon, on the other hand, occupies primary real estate on the dresser in my bedroom. It is quiet enough to sleep next to, and with its almost poetic juxtaposition of ultra modern styling next to its association with traditional mechanical watches, it is as much of a display piece as it is a practical tool.

The Orbita Tourbillon is available in single or triple units, retailing for $995 and $2,995, respectively. If you’re going to splurge, I recommend the triple unit so your other watches don’t get jealous.