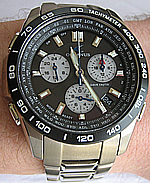 Oceanus seems to represent Casio’s desire to creep upmarket in the US. In Japan, you can actually drop over $1,000 on a high-end Casio G-Shock, but to most Americans, the brand Casio usually means geeky at best, and cheap at worst. Frequent readers of Watch Report know better, however. In my opinion, Casio makes some of the most technologically advanced, rugged, and interesting digital watches available. But since Casio doesn’t have time to wait for Watch Report to enlighten the entire American watch-buying public, they have repackaged their ingenuity into a shiny new brand: Oceanus.

I do think Oceanus watches are deserving of a brand all their own. With features that go beyond even my favorite US G-Shocks (titanium construction, handsome, low-profile cases, sapphire crystals), they deserve a chance to make their own way in the market.

The downside of removing the LCD is that the watch gets slightly more complicated. The unit I received didn’t come with an instruction manual, and after about 10 minutes of playing with buttons and watching the seven hands (seven!) spin and reel, I headed online to hunt down a PDF version of the booklet. Fortunately, with a little guidance, I found the 5 Motor fairly easy to use, however if you’re the type who refuses to read manuals, you probably won’t get the most out of this watch.

Features of the Oceanus 5 Motor include:

On top of being a functional, sturdy, and a nice looking timepiece, the Oceanus 5 Motor is exceedingly comfortable. I’ve been wearing it for several days now, and it has a way of making you forget it’s there. The titanium case and bracelet keep it lightweight, and the contour of the case keeps it perched properly on top of my narrow wrist. Speaking of titanium, I’ve had trouble in the past getting titanium atomic watches to calibrate, possibly because it’s more difficult for the signal to penetrate titanium than plastic, however the Oceanus 5 Motor has no difficulty receiving a signal from San Francisco. (Disclaimer: I can only vouch for signal reception in San Francisco — as with all atomic watches, your mileage may very depending on where you live.)

Although I’ve been very happy with the Oceanus 5 Motor, there are a couple of minor issues. First, it doesn’t have any type of lighting system other than luminescent paint on the hands and hour markers. Although I’ve found that the luminosity does last all night (this was easy to test because between kids, earthquakes, and general city cacophony, I’m awakened at all hours of the night), I wouldn’t mind seeing the 5 Motor outfitted with the same LED illumination system as the Oceanus Chronograph. The 5 motor is also not the easiest watch to get the hang of. I’m a watch geek, so I picked it up pretty quickly, but for some, there will be a fairly steep learning curve. Fortunately, there’s a little cheat sheet etched in the back of the case next to the pushers in the form of ALM (alarm), WT (world time), ADJ (adjust), and CHR (chronograph) to remind you which buttons do what, so you can always refresh your memory while standing in line at the DMV.

The Oceanus 5 Motor retails for $580 MSRP, and can be purchased at several retail outlets, and here and there online.