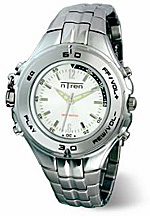 The nTren MP3 watch is a welcome addition to the rapidly growing world of wrist MP3 players. Ironically, what sets the nTren MP3 watch apart is not its prowess as an MP3 player, but rather its surprisingly good looks. Just when most watch geeks had resigned themselves to having to strap hideously conspicuous devices to their arms in order to get their constant technology fix, nTren subverts the stereotype with what I think is a pretty darn elegant looking MP3 watch. If you’re into MP3s, and you’re also into not looking like a geek, the nTren MP3 watch could be your next new toy.

Features of the nTren MP3 Watch

Putting the nTren MP3 Watch Through Its Paces

The first thing you will notice about the nTren is that it comes in a very nice box with everything you need included. The next thing you will probably notice is that the nTren MP3 watch is a pretty darn good looking timepiece. The one I got has a black dial and a black leather strap, and although I usually favor stainless steel or titanium over leather, I feel like in this case, the combination works well. The watch case contains several controls (four buttons, a crown for setting the analog watch, and a USB port), but they aren’t overly conspicuous. Even the little metal stopper that goes over the USB port to pressure seal the watch is not a visual burden. And the size of the watch, while not exactly subtle, is still well within the realm of reasonable, and these days, could even be considered fashionable.

I charged the watch and immediately put it to use. I found it completely intuitive, and never picked up the instructions at all except to make sure I didn’t actually miss anything. I have a bit of an advantage, though, since it functions almost identically to the Xonix MP3 watch I reviewed a couple of weeks ago, so the average user will probably want to at least skim portions of the instructions before diving in. The bottom line is that it’s plenty easy to use, and should not pose a challenge to anyone who even knows what an MP3 is.

I really like the accessories the nTren MP3 watch comes with. Both the headphones and the USB cable retract into small spring-loaded plastic reels in order to keep them from getting tangled, and to make them more portable. And both the AC adapter, and the standard headphone adapter, are included. Thanks, nTren, for not trying to nickel and dime your customers by selling these accessories separately.

The watch worked equally well with both my Macintosh PowerBook and IBM ThinkPad, as expected. Both OS X and Windows recognized the device and did the right thing as soon as it was connected. (Although the directions that come with the watch indicate that only Windows operating systems are supported, OS X works just fine, though the Mac will create additional metadata files on the watch like .DS_Store which waste small amounts of space.) There were three tracks already on the watch: Heavy, Somewhere I Belong, and With Arms Wide Open. I copied a couple albums over from my personal collection, and a couple small images, as well, in order to make sure the watch functioned properly as a USB storage device. Although USB 1.1 is obviously not as fast as 2.0 or firewire, for the amount of data you can fit on these devices, it’s really not a long wait. I then ejected the watch (always eject the watch before unplugging it), put in the headphones, and started listening. I buried some MP3s a few directories deep, and the MP3 player had no problem finding them. The image files were simply ignored while in play mode, as expected.

You have to have the headphones connected to the nTren MP3 watch in order for it to play which is a feature I like. That means you can’t accidentally press the play button while you’re wearing the watch and inadvertently deplete the battery. You also have to hold the play button down for about two seconds as another security measure. The MP3 player will stop if, at any time, you remove the headphones as an alternative means of shutting it off. I would actually prefer it if the MP3 player were to automatically pause when the headphones are removed, like the iPod does. That makes it easy to just yank the headphones out if someone is trying to talk to you, or if the headphones are inadvertently yanked out, you won’t lose your place.

It’s not enough for technology to just perform anymore. These days, it has to present, as well, which is precisely the premise of the nTren MP3 watch. Sound quality, 10 hour battery life, and a very attractive deign make the nTren MP3 watch a good choice for those who are interested in both functionality and fashion.

How do you transfer files on to the nTren MP3 watch?

Just connect the watch to your Windows or Macintosh computer with the included USB cable, then drag and drop files via Windows Explorer or the Macintosh Finder. No other software is required unless you’re using Windows 98 or prior, in which case you will need to install the included drivers.

Will music in subdirectories get played, or do I need to put all my MP3s in the root directory of the watch?

The nTren MP3 watch will find and play MP3s in subdirectories, so you can keep your watch’s file system well organized.

What music file formats does the nTren support?

The nTren MP3 watch only plays MP3 files between 32kbps and 256kbps.

Can I store files other than MP3s on this watch?

Yes. The nTren MP3 watch can be used as a USB storage device, as well.

How much music can I fit on the nTren MP3 watch?

Is the watch water resistant?

Yes. The nTren MP3 watch is water resistant to 30 meters, or 100 feet, according to the documentation.

Can I use my favorite headphones with this watch?

Yes. Included in the box is an adapter for standard 3.5mm headphone jacks. I even played a few tracks over my Altec Lancing computer speakers, and they sounded great.

Do the MP3 player and the quartz watch share the same rechargeable battery?

How long does the battery last?

About 10 hours. During my tests, it actually lasted 10 hours and 11 minutes.

How does the nTren MP3 watch recharge, and how long does it take?

It recharges automatically while connected to your computer, or you can use the included AC adapter to charge it. I found the watch took about three hours to charge through the USB connection.

How accurate is the watch.

The nTren MP3 watch has the accuracy of a standard quartz watch. I found it gained about half a second over 24 hours which is a pretty standard variation.

Is there a random mode?

No. MP3s are only played sequentially on the nTren MP3 watch.

How does the equalizer work?

Just press the EQ button (upper left-hand corner) to cycle through the 5 equalizer modes (normal, pop, classic, rock, and jazz) while an MP3 is playing. There is no visual indication of which mode you are in, so you will probably just want to keep experimenting until you find the mode that sounds best.

What operating systems is the nTren MP3 watch compatible with?

Windows 98 and above, and Macintosh 8.6 and above. (I only personally tested it with Windows XP Professional and OS X 10.3.6.)

Is the watch’s firmware upgradable?

Not at this time.

How is the sound quality?

Sound quality is usually a tad subjective, but I found it to be quite good. No complaints with either the included earphones, nor with my own equipment.

Does the watch come with headphones?

Yes. The nTren comes with a set of retractable earphones as well as an adapter to allow you to use your own.

Why does it appear that the watch is out of space when I’ve deleted everything on it?

Try emptying your trash or recycling bin while the watch is connected. Otherwise, the files are just marked for deletion, but they aren’t actually deleted. This is behavior we generally appreciate on large hard drives, however it doesn’t work so well on small capacity removable media. This has nothing to do with the watch, but rather is a function of the operating system.

What version of USB does the nTren MP3 watch support?

What different styles does the nTren MP3 watch come in?

The nTren MP3 watch comes with either a stainless steel bracelet or a black or brown leather strap. The dials (the face of the watch) come in black, white, or silver, although I’ve recently been informed that new designs are on the way. Storage capacities are 128MB, 256MB, and soon, 512MB. Check out the nTren MP3 watch photo gallery for pictures of all currently available models.

What different capacities does the nTren MP3 watch come in?

Are there any accessories available for the nTren MP3 watch?

nTren Sounds has recently announced an accessory that will allow you to play MP3s from your watch in your car wirelessly though the FM stereo.

How much does the nTren MP3 watch cost?

Where can I get one of these?