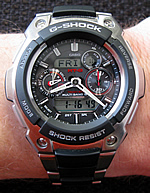 I’m a big fan of Casio’s MRG line of watches (as evidenced by my recent review of the MRG-7500BJ), but there’s no question that they are expensive. Fortunately, Casio created the MTG line of watches for those of us who want all the features of the MRG line (and even a few more), and are willing to compromise on the quality of the materials in order to get them.

Although lacking the highly scratch resistant DLC (Diamond-like Carbon) coating of the high-end MRGs, and the nearly scratch-proof sapphire crystal, Casio’s MTG series sacrifices absolutely nothing in terms of features. In fact, the MTG-1500 even comes away with significantly more functionality than anything in the MRG line, as well as a very unique style all its own.

Features of the Casio MTG-1500-1AJF include:

For people like me who love high-precision watches with an abundance of features, there’s nothing not to like about the Casio G-Shock MTG-1500. At less than $500USD, even the price is extremely attractive for this level of technology. Of course, the MTG-1500 isn’t available in US, but it can be had through all the usual means. I personally guarantee that it’s well worth your trouble.