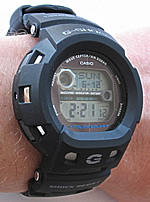 When I first saw the new Casio GW-400J vibrating watch, I knew I was going to have to get my hands on one. You see, I’m very in to vibrating watches. Not because I’m some kind horological pervert, but because they make so much sense. Ever since a got my Timex Internet Messenger some six years ago or so, I’ve always felt that digital watches should have vibrating alarms. What good is it having multiple daily alarms, programmable alarms, auto-repeating countdown timers, and an hourly signal if you can’t hear them because they are so faint, or because you live in a world where you don’t want your geeky watch attracting attention?

Not only was I tempted by the Casio GW-400J’s vibrating alarm, but it’s even solar powered. And atomic. And it has a countdown timer. True, it’s goofy looking, but I just named all my favorite digital watch features, and it’s very unusual to find them all in one place. Besides, big black plastic Casios appear to be in right now, at least in San Francisco where I live.

Before I get into my review of the Casio GW-400J, here’s a list of features:

You should know straight away that this watch was not meant for us yanks, and in fact, is currently only available in Japan (see below for how to get one). The instruction booklet is entirely in Japanese, and I was not able to find an English version online. Also, the thermometer only displays the temperature in Celsius, and not in good old fashioned Fahrenheit. Fortunately, the time calibration functionality works fine in the US using the atomic clock in Fort Collins, Colorado, so as long as you don’t mind the metric system and a little bit of trial and error, you and the Casio G-Shock GW-400J should get along just fine.

The first thing that struck me about the Casio GW-400J when it arrived from it’s long journey across the Pacific was it’s size. With all the features Casio packed into this thing, I expected it to be huge and heavy. And all the pictures I was able to find of it made it look pretty burly — especially because of the duel pins in the buckle (see the Casio GW-400J photo gallery to see what I mean). In reality, however, I was relieved to find that GW-400J isn’t actually any bigger than your standard G-Shock, and in fact, is smaller than many (the exact dimensions, for those interested, are 54.5 mm x 46 mm x 15.1 mm). And I was glad to find it comfortable and light on my arm, as well. The GW-400J might not be much to look at, but it is definitely not the cumbersome hockey puck I was expecting.

While I was pleased with the size and weight of the GW-400J, I soon found I was disappointed by the overall feel of the watch. The GW-400J is not a high-end G-Shock, but for such a unique and unusual model, I expected it to be a little more solid. I think what makes the watch feel cheap are the little plastic buttons, and the two little gray plastic protrusions on either side of the G-Shock “G” which are supposed to look like metal, I guess. That’s not to say the GW-400J is cheap. In fact, considering it can withstand depths of up to 600 feet, I’m certain it’s quite durable, but there’s something about little plastic buttons that makes it difficult for me to take a watch seriously. The buttons on the Casio GW-400J are small enough that they are difficult to push, and they give absolutely no indication that they have registered other than their affect on the display. Buttons, in my opinion, are like car doors: it doesn’t matter how nice or expensive a car is — if the doors aren’t solid and satisfying when they slam, it feels cheap.

The face of the watch is divided up into five distinct sections. The two most prominent are the top and bottom LCDs. The top LCD is made up of an LCD grid which can be used to display the date, temperature, or tide chart while in time mode, and is used as a mode indicator when not in time mode. The fact that the top LCD is actually an LCD grid, or dot matrix, with a couple hundred “pixels” makes it very versatile, and allows the watch to do slick things like display the home time while in world time mode. The lower LCD is primarily used for time, or for configuring whichever mode you happen to be in. The face also contains a circular moon phase indicator (more on the moon phase feature below), power reserve and time calibration indicator, and a fairly large circular LCD “pie” with five slices which count off seconds. The circular second counter seems a little large and superfluous to me, but it’s a popular option among other G-Shocks, so I guess it’s well liked by many.

The GW-400J doesn’t have the standard G-Shock illumination button on the band like just about every other G-Shock I’ve ever seen. The upper right-hand button activates the electroluminescent backlight instead, which gives the watch a non-standard G-Shock button configuration. The only real disadvantage is that the backlight is slightly more difficult to activate in the corner, and you have one less button to use to interact with what amounts to a pretty complicated digital watch. Given my choice, I would rather see it in it’s familiar G-Shock position on the band, freeing up the top right button for more important functions.

The intensity of the backlight is sufficient. It can be set to active for either two or three seconds, depending on how stingy you are with your battery. It can also be configured to auto-illuminate when the solar sensors in the watch detect that it is too dark for you to see the face, and when it is tilted toward your face (about 40 degrees). For those of you, like me, who can’t read Japanese, toggle this feature on and off by holding down the illumination button for several seconds.

The vibration function of the watch works sufficiently, though it’s a little weaker than I’d like. I was always able to feel the alarm, but the hourly time signal vibration only grabbed my attention less than half the time. And if you were planning on using the vibrating alarm as a way to wake yourself up in the morning while allowing your partner to sleep in, you will need to be one incredibly light sleeper. I think the GW-400J generally serves the purpose for which it was intended, however, which is the ability to keep track of time, events, and intervals while participating in water sports when wind and waves would keep you from hearing a faint high-pitched beep. And considering the fact that the GW-400J doesn’t have a lot of power or space to work with, I think it performs admirably, though not was well as the much larger and power hungry vibrating Tissot High-T.

I like the fact that the thermometer can be used for measuring both air and water temperature, although I really wish I could toggle it from Celsius to Fahrenheit. Admittedly, I can’t really blame the watch or Casio for this since it was never meant for an American audience, however one thing I can blame the watch for is the fact that you don’t seem to be able to reset the thermometer to its factory calibration. I didn’t realize this until I had already re-calibrated it into complete uselessness, where, for all I know, it remains to this day. The only way to get it to be even remotely accurate again would to manually calibrate it with another thermometer, however since I can’t really make sense of Celsius anyway, I never bothered.

The GW-400J’s moon phase indicator is interesting, and seems to be very accurate. It appears as a small LCD circle at what would be the 3 o’clock position of an analog watch. Right now, it’s telling me there is a full moon which I noticed and verified on my way home this evening. The phase of the moon is not information I find myself needing often, but it uses so little real estate out of the face of the watch that it’s actually kind of a fun addition.

The tide indicator function of the Casio GW-400J is kind of cool. Since I can’t read the instructions, and I don’t have any other watches with tide graphs, I don’t know exactly how it works, but it seems fairly intuitive. The x-axis represents time over a 24-hour period, and the y-axis represents the height of the tide. The point representing the current tide level blinks to make it easier to spot among the other dots. You can set the watch to one of 200 locations worldwide so the graph will roughly correlate to your geographical region. I say “roughly” because predicting tides based on a general graphical region is really a lot of guesswork, and since there are only 200 locations, you may not even be able configure it for your favorite beach. I live in San Francisco which isn’t included, so I settled for San Diego. Whether it’s accurate or not, I have no idea whatsoever, but it’s probably more accurate than guessing.

Considering this is a very feature-rich watch, however, which can be had for right around $200, I’d say it’s still a pretty compelling addition to the G-Shock family.