Orient Watches recently started selling their products in the USA, and to promote this have released a new watch that’s only available via promotion. In other words, they made very few of these, so unless you win it from us you’re not likely to ever see another one!

So this post will be a combination of mini-review and instructions on how to enter the contest. Read on for details!

The Orient brand is one little known to those outside of Asia, though they’ve been in business since 1901 and are majority owned by Seiko. Since 1950, they’ve made over eighty million mechanical watches! I’ve owned one myself and quite liked it. (It was a pilot-style mechanical with power reserve, sold to fund another purchase.)

Orient takes a different approach to mechanical from the Swiss movements most people have seen: their movements rarely handwind or hack, and almost all have a power reserve indicator. The PR, as it’s known, is kind of a signature on their dials. Calibrated in hours, it shows how long before the movement needs to be wound. The CFDAC004W0 has a 40-hour reserve, with the PR at 12 o’clock on the dial.

This picture shows what you can win: the watch, new in box and still plastic-wrapped, an Orient ID ribbon, box, manual and international guarantee. Pretty nice, eh?

Since we’re giving this one away, I didn’t wear it or remove the plastic, so I don’t know how it’ll be to wear, keep time, etc. I quite like how it looks, though. The blued hands, Roman numerals, stamped guilloche face and rectangular shape work very well together. Hopefully Orient will produce a similar model for the rest of us. 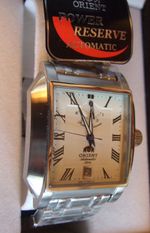 So, you ask, how do I win this lovely watch all for myself? Well, we debated this and decided to try mixing it up with the question of ‘How to use social media for WatchReport.’ To wit, James has started Twittering as ‘watchreport,’ and we’re not sure how useful it’ll be. Here’s what we came up with:

Our thanks to Orient USA for this gift to the WR community!

Example tweet: “I need this watch to win the girl of my dreams as I contest on a game show. #wr-orient”

Update: Due to varying laws about contests and gambling, we must regretfully restrict this to US citizens.

Update 2: We have a winner! @nasukaren takes the prize with this tweet: “there’s a beautiful orient watch on watchreport.com that I’d love to give my dad if I won it” 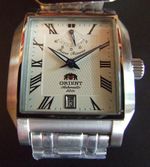