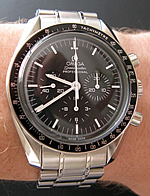 I have a thing for durable watches. Finding a watch that can stand up to an active lifestyle, and still look good and keep great time over the period of many years, is surprisingly difficult. If you want a really robust watch, the conventional wisdom is to go with a Casio G-Shock if you’re looking for a quartz or digital solution, and a Rolex if you want something Swiss and high-end. But Omega fans know there’s another option which has one of the most interesting backstories in the history of horology.

The Omega Speedmaster Professional lands squarely between a high-end G-Shock and sport model Rolex in terms of price, looks fantastic, and has stood up to some of the most rigorous testing that any watch has ever been subjected to. Not only have Speedmaster Pros gone into space on many occasions, but they have actually been worn outside a space suit on the surface of the moon.

Before I get into the history of the Omega Speedmaster Professional, let’s cover the specs:

As you can see, the Omega Speedmaster Professional isn’t a fancy watch in terms of complications and features. It has to be wound manually, it doesn’t have a date display, I wouldn’t get it wet beyond a shower, and the crystal is relatively easily scratched. But what it does have is a combination of simplicity, build quality, and well chosen materials that make it one of the most robust and interesting watches currently on the market. Let’s take a closer look.

This was my first experience with the legendary “Speedy” bracelet, and I’m hooked. I’ve handled a lot of stainless steel bracelets over the years, but I’m pretty sure this is my favorite. It’s solid, perfectly machined and built, and completely silent (no squeaks). While it’s robust, it’s not so massive as to be a burden or feel like an anchor. The clasp design is simple and elegant, and the polished strips that cap the center links give it just a touch of class.

Yes, the movement has to be wound manually, and no, there’s no date or day or moon phase or GMT hand, but there’s something to be said for a simple design in terms of robustness. The Lemania 1861 movement has changed very little over the history of the Speedmaster, and for good reason. If it ain’t broke, don’t fix it. It is now rhodium plated (which is the difference between the 861 movement, and the 1861 movement) for additional corrosion resistance, but that’s about it. So how does it perform by today’s standards? Mine is about 1.5 seconds fast per day — as good or better than any other mechanical watch I’ve ever owned, including many that cost far more.

Now that practically scratch-proof synthetic sapphire is the standard in high-end watches, why would anyone want a throwback to the days of plastic? Two reasons. The first is simple aesthetics. Although sapphire is far more scratch resistant, some people simply prefer the look of the Hesalite (it tends to have a look which is more functional than classy, in my opinion). And the second is that although sapphire is very scratch-resistant, it breaks relatively easily. What do I mean by “easily?” Well, don’t drop a watch with a sapphire crystal on a tile floor, and if you’re going to be swinging your arm around with any velocity, make sure there’s no chance your watch might hit anything of any substance. While the Hesalite crystal is certain to pick up minor scratch over the years, there’s not a lot you can do to it to actually break it. The other advantage to the Hesalite is that it’s very easily polished if the scratches start to bother you, and relatively inexpensively replaced if you really gouge it.

Now that your typical Casio G-Shock is water resistant down to 200 meters (about 660 feet) and most of the big Swiss brands have watches with screw-down crowns that are rated to 300 meters (about 1,000 feet), 600 meters (about 2,000 feet) and even 1,220 meters (4,000 feet), why would you settle for a mere 50 meters, or 167 feet? Primarily because 50 meters if perfectly sufficient for most of us. If you’re a diver or even a frequent swimmer and you don’t want to change your watch, the Speedmaster certainly isn’t for you. But if you just want to feel confident in a rain storm, rinse your watch off when it’s dirty, take the occasional shower with it on, or not have to worry about falling into a pool, then 50 meters is perfectly fine. The Speedmaster has also demonstrated more than enough water resistance to function perfectly well in very humid conditions (more on this below).

So what makes the Omega Speedmaster Professional such a legend? By now, most watch aficionados know that the Speedmaster was worn on the moon, but most don’t know the details behind the story.

When the Speedmaster was introduced in 1957, Omega had no intention of sending it into space, but the combination of the chronograph and the fact that it is a manual-wind watch made it a great choice during some of the Mercury missions. Astronauts needed a manual-wind watch since automatic (or “self-winding”) watches rely on a weighted rotor which doesn’t work well in zero gravity, and they needed a highly accurate chronograph for timing rocket firing sequences. During the Mercury missions, astronauts could wear any watch they wanted, or even no watch at all, since watches were basically backups to the onboard clocks, but during the Gemini and Apollo programs — which involved EVAs (extravehicular activities) which needed to be timed — the right watch became far more important.

In 1962, NASA began searching for a more official piece of timing equipment to be worn by Gemini and Apollo astronauts. Several watches were purchased over-the-counter and subjected to rigorous testing including temperatures from 0° to 200° F, 12g’s of acceleration, extreme humidity, and a violent vibration test. Some of the Mercury astronauts’ instincts had been spot on: the Omega Speedmaster Professional was the only one to pass all of NASA’s tests. In 1965, the Speedmaster was declared the official watch of the US space program.

The Speedmaster was subsequently worn by Edward White on the first America spacewalk in 1965, Buzz Aldrin in 1969 during his and Neil Armstrong’s famous first lunar excursion, and it was used by James Lovell to time various burns during the ill-fated Apollo 13 flight since the onboard clocks were inoperable.

The Omega Speedmaster thus survived some of the most rigorous testing of any watch in the world as well as the harshest environments and conditions known to man, and even several political attacks by Bulova watch company who insisted that NASA should be using American technology rather than Swiss (the Bulova watches never passed all of NASA’s tests like the Speedmaster did). The Omega Speedmaster became such an important and recognizable icon of the space program that Buzz Aldrin’s Speedmaster — the first watch ever on the moon — was tragically stolen while being transfered along with other equipment to the Smithsonian for display.

At this point, there are several versions of the Speedmaster available. You can now get them with Co-Axial escapements, self-winding movements, sapphire crystals with anti-reflective coatings, date and day-date complications, display casebacks, 100 meters of water resistance, GMT functionality, and all kinds of variations in hand design, case and bracelet materials, dials, and straps. But Omega has continued to offer almost the exact same watch that was chosen by NASA in 1965 which I have now chosen as my first Omega all these years later.

While there are at least eleven different Speedmasters available today, there is only one true moon watch.