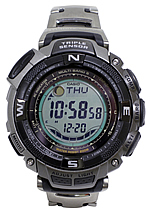 Two years ago, I wrote an article called The Ultimate Casio Pathfinder in which I raved about the PAW1200 series. This was the first time Casio had combined their atomic and solar technologies with their famous Triple Sensor (digital compass, altimeter, barometer, and thermometer). A year later, I reviewed what I considered to be the new ultimate Casio Pathfinder — the PAW1300 — which is essentially the same watch in a significantly slimmer package. Today, I’m extremely pleased to introduce what even Casio is now referring to the Ultimate Pathfinder: the PAW1500 series.

In addition to being solar and multi-band atomic, having all the digital watch features you’d expect like multiple alarms, countdown timer, world time, and a stopwatch, and in addition to being a Triple Sensor, Casio has added three significant new features to the PAW1500 line:

I really have to give Casio a lot of credit for adding precisely the right features to the Pathfinder line. It used to be that I had a hard time choosing a Pathfinder over a G-Shock day-to-day because I insist that all my Casio watches be solar and atomic. But then Casio made the Pathfinder line solar and atomic. I now wear my PAW1300 fairly often, but I still love the additional ruggedness of my G-Shocks. So naturally, Casio has made the new PAW1500 series more rugged by increasing the water resistance, and adding robust button guards.

There’s one more feature that, in my opinion, really helps to make the PAW1500 the ultimate Casio Pathfinder. For the first time, the day, date, and month are all visible simultaneously. This may seem like an insignificant detail, but it means a lot to people like me who lead such hectic lives that it’s sometimes hard to keep track of the day of the week, much less the month and date.

The new Ultimate Casio Pathfinder will be available in May in either black resin ($350), or resin with a titanium band ($400). You can bet we’ll have a thorough review as soon as humanly possible.