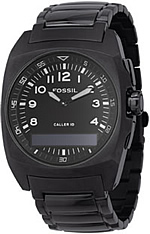 Bluetooth watches will finally become a reality at the end of October thanks to Fossil and Sony Ericsson’s new Caller ID Bluetooth watch. The watch pairs with Sony Ericsson Bluetooth-enabled phones and Nokia series 60 phones running Symbian 7, 8, and 8.1 to alert you when someone calls. Not only does the watch discreetly vibrate, but it displays caller ID information on a small OLED display, and allows you to mute or reject the incoming call. Very slick. It even notifies you of incoming text messages, as well. Here are the details:

In general, I’d say Fossil and Sony Ericsson have come up with a pretty compelling piece of technology. One of my big concerns with Bluetooth watches has always been battery life, but 5 – 7 days is very reasonable. Just charge your watch when you charge your phone, and you should be all set. Of course, keeping an active Bluetooth connection between your watch and your phone will drastically reduce your phone’s battery life, but I tend to believe that as long as a phone can make it through an entire day of active use, that’s good enough (I think it’s easier to remember to charge your phone every night than every 5 days).

My other concern was style, and how an obvious lack of it would affect adoption. Fortunately, I think Fossil has learned the hard way that technology which doesn’t come in a pretty package is technology that won’t last (see the discontinued Abacus Wrist PDA and Abacus Wrist Net series). In my opinion, the Fossil Caller ID Bluetooth watch is a relatively handsome and unassuming timepiece.

The only thing I would add to Fossil’s Caller ID watch is the ability to synchronize with the phone’s time. Although I think this watch represents an impressive piece of technology, I actually wouldn’t call it a true Bluetooth watch because the watch itself (the portion that tells time) actually isn’t integrated with the Bluetooth functionality, as far as I can tell. In other words, the Caller ID watch is basically an analog watch and a Bluetooth caller ID device crammed together into the same case, operating completely independently. If they were integrated, the watch could be synchronized with the phone’s internal time which phones get from their networks which is usually synchronized against a time server which, in turn, is synchronized with an atomic clock, which basically turns a Bluetooth watch into an atomic watch, as well.

The Fossil Caller ID Bluetooth watch will be available at the end of October, and will sell for $249. If you’re the impatient type, you can pre-order one now from Fossil’s site.