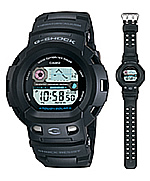 Over a year ago, I came across the Casio G-Shock GW400-J vibrating watch, and was so enraptured by the prospect of having an atomic solar G-Shock with a vibrating alarm that I ordered one immediately. Unfortunately, they were only available in Japan, so I had to buy it “gray market” and pay top dollar. I reviewed the GW400J as soon as I received it, and the story got so much traffic that I got an email from Casio asking me to make it very clear in the article that the watch was only available in Japan because they were getting so many calls from people in the US trying to buy one. Of course I agreed to make the change, but I also used the opportunity to encourage Casio to try releasing the GW400J (and other cool new G-Shocks) to us poor Yanks who I believe are starting to love geeky wrist gadgets as much as the Japanese. I never heard back directly, but while doing a routine scrub of Casio’s online watch selection the other day, I was pleased to find the G-Shock GW400J-1 available for sale on the US site.

I gave Casio a call, and was told that the only difference between the GW400J (the Japanese version) and the GW400J-1 (the US version) is that the temperature (yes, the watch has a thermometer, as well) on the US version can be displayed in both fahrenheit and in celsius whereas the Japanese version only supports celsius. Keep in mind that I have not confirmed this for myself, so if you buy one, and you absolutely need the temperature to be in fahrenheit, save your receipt.

So now I’m faced with a difficult decision. Do I spend $200 replacing my GW400J with a GW400J-1 just to get the temperature in fahrenheit, or do I stick with my gray market Japanese version? I’ll probably save my $200 for whatever vibrating solar atomic contraption Casio releases next, however if I happen to come face to face with one in a store, I reserve the right to change my mind and buy it on the spot.

I’m obviously a big fan of the GW400J-1. I would definitely say that it’s one of the top five most interesting G-Shocks out there. For a thorough rundown, check out my review of the GW400J. Or better yet, pick one up yourself and get to know it firsthand.

Update and Warning: I’ve received a few emails from people who have purchased the GW400 in the US, and they have not been able to figure out how to change the temperature units over to fahrenheit. It’s possible Casio did not modify the watch before releasing it in the US. Shame on them.