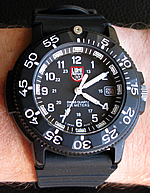 I look at a lot of different metrics when evaluating and reviewing a watch, however there’s one metric that I hold above all others: wrist time. Wrist time is simply the amount of time I wear a watch beyond the amount of time needed to review it.

The Luminox Navy Seal does very well in this category. Although I can’t pinpoint exactly why, I’ve been wearing it pretty consistently for weeks. I think it’s a combination of comfort, tritium gas tube illumination (which I’ve really come to love), high-contrast readability, and overall value. How do I judge the overall value of a watch? Let me put it this way: the Luminox Navy Seal isn’t the most sturdy watch I own, but if I ever managed to destroy it, I would have no problem spending the money to replace it, and would probably do so at the first opportunity.

I’ve said it once, and I’ll say it again: I love the tritium gas tube illumination system which allows the hands and hour indices to glow brightly and consistently for 25 years without having to absorb light. Since I don’t use an alarm clock, and since I have kids who feel compelled wake me up throughout the night, I love always being able to easily read off the time. The Luminox Navy Seal is more than comfortable enough to wear to bed, so I’ve gotten in the habit of putting it on at night (if I’m not already wearing it), and wearing it all the way through my workout the next morning. Now that I have other watches to review, it usually has to come off when I get out of the shower, but occasionally I’ll continue wearing it throughout the day.

Features of the Luminox Navy Seal 3001 include:

This watch was generously provided by Princeton Watches.