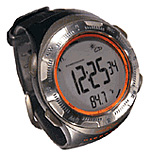 I didn’t even know that the HighGear Summit watch existed until I discovered this review over on WetDawg. If you’re in the market for an outdoor sports watch with an altimeter, barometer, thermometer, and compass, this looks like it might be a viable and affordable option.

The HighGear Summit sells for about $149, and appears to be available at most stores specializing in outdoor and hiking equipment. The author makes the following observations about his new toy:

Check out the full article for more details. The review caught my eye because I am a big fan of the Tissot T-Touch which offers a great deal of the same functionality (check out my Tissot T-Touch review for details), but in a much smaller and more attractive package, and with a scratch-proof sapphire crystal. I wore a T-Touch when I first moved to San Francisco about two months ago to help me get my bearing when walking the city, but that’s about as outdoorsy as I get these days. I also recently received a similar new stainless steel and titanium Casio Protrek which I will be reviewing shortly. I still need to put it through its paces, but at first glance, it appears to be a nice combination of functionality, affordably, and visual appeal (compared to the old Protreks and Pathfinders). Stay tuned.