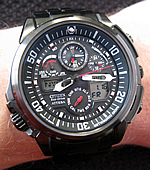 About three or four years ago, I got an email from a reader chastising us for not having better coverage of Citizen. I remember thinking at the time that I really wanted more Citizen content on Watch Report, but that they just weren’t doing anything all that interesting. I promised the reader that we would keep a closer eye on Citizen’s new watches, and do our best to make sure they were better represented.

Fast forward to the present, and Citizen is now one of my favorite brands. Since June of 2006, we’ve written 11 articles on Citizen watches, and I anticipate that the pace will increase. Every year, Citizen is stepping up their game and releasing more and more watches that are grabbing our attention. Although I’m still a diehard Japanese-market Casio G-Shock fan, I now regard Citizen watches with the exact same level of respect.

A great deal of my interest in Citizen watches comes from the Attesa line which I consider comparable to the MR-G line of Casio G-Shocks. Both lines represent some of the most advanced, durable, and certainly coolest quartz watches in the world.

The first Attesa to really grab my attention was the ATV53-2832, but it was the extremely unique look and functionality of the ATV53-2933 that finally inspired me to do a full review.

Let’s start with a detailed rundown of an extremely impressive (and lengthy) set of features:

In general, three things about the Citizen Attesa ATV53-2933 really stand out:

As you might have guessed, I’m a big fan of the Citizen Attesa ATV53-2933, and of Citizen watches in general. Citizen’s closest competitor is probably Casio, and while I’m a very big G-Shock fan, I think Citizen has continued to innovate and distinguish itself by producing some extremely impressive timepieces. Like many great Citizen watches (too many), the ATV53-2933 is not available in the US, but it can be imported by overseas retailers for something around $1,300.