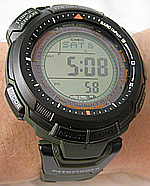 When I reviewed the Casio Pathfinder PAW1200 about a year ago, I referred to it as “one of the most advanced digital timepieces in the world”. Of course, it is also one of the biggest. The new PAW1300 takes all the same features and technology of the PAW1200, and fits it into a significantly slimmer package.

I don’t want to spend a lot of time going over the features of the Pathfinder PAW1300 since I’ve gone over them in detail in the review of the PAW1200. Rather, I’d like to defer to Watch Report reader Sam Tannous who related his experiences with the new PAW1300 in this email:

About the PAW1300: I’ve been wearing it for about a week now and I really like it. From what I can tell (after re-watching your video and re-reading your review of the 1200), it seems to be just a smaller version of the 1200. The few differences that are easy to spot are the lack of the LCD overlay for the compass. The 1300 now has a small ring just inside the solar collector ring which functions as a second-hand sweep (a small rectangle at the edge moves around the dial to indicate seconds). The compass also uses this ring and indicates north with three small rectangles (as well as one rectangle for the other directions). I think the LCD overlay would have been easier to see, and also would have had a more intuitive “compass” feel. But I quickly got used to this small limitation. The small ring is also used by the barometer to indicate falling or rising pressure.

One other small difference is that the stopwatch and the countdown timer mode now have the hour counter in the top window (which is not such a big change if you remember which mode you’re in (you lose the mode indicators “STW” and “TMR” after about a second and they are replaced by a “0H” which if fine unless you confuse it with “OH!”). The stopwatch mode also moved the one hundredths counter to the top window as well. This is small and a bit harder to see, but it’s a sacrifice I gladly made to have a smaller watch.

I live in RTP, NC and the radio receiver seems to pick up the Colorado Springs atomic clock without any trouble about 90% of the time (usually on first try at 12:05am). In the past couple of weeks, it has missed syncing only twice and that is most likely due to my placing it near some electronic equipment overnight. I found it very difficult to sync the watch during the daytime and if you ever listen to shortwave radio you will understand the reasons for this: it’s almost always easier to pick up a weak shortwave signal at night. Casio probably knows this and this is why the watch is programmed to attempt syncing at 12:00am and for the next 4 hours on the hour.

All in all, it’s a great watch. I got the titanium watchband since I tend to wear out leather and rubber watchbands fairly quickly. It’s a bit more expensive then the other bands (I paid $239) but I think it will be worth it.

Thanks, Sam. I couldn’t have said it better myself. All I have to add is:

There are things I like about the PAW1200 over the 1300, and if I had enough real estate on my wrist to accommodate it, I’d probably go with the PAW1200. Being that I am a watch lover cursed with relatively narrow wrists, however, I find the PAW1300 to be a much better fit without any compromise in functionality.