These days, it seems new designs are increasingly rare in the modern watch world as so many new watches share major design elements with watches we’ve seen in the past. How many different brand names have you seen that fundamentally look like a Rolex Submariner? Halios is looking to shake this derivative funk with the release of their highly anticipated BlueRing diver.

We were lucky enough to score a review sample in the form of a blue dialed and brushed steel model direct from Vancouver. Frequent visitors will remember our review of the Holotype about a year ago and how we came away impressed by the design, quality, and value of their first offering. The BlueRing expands on the Halios brand with better technology, a fresh design, and a more wearable package.

Let’s start with the details: 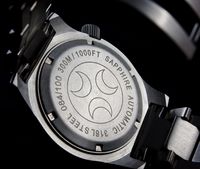 The biggest change from the Holotype to the BlueRing is the movements that Halios has decided to install. Where the Holotype was powered by the adequate Miyota 8215, the new BlueRing is powered one of by two options. The blue and silver dialed models get the popular ETA 2824-2 which is the movement of choice in this price range, and readily found in many competitors’ watches since it’s an accurate and well built Swiss option. Black dial models, on the other hand, are powered by the very capable SII NE15 movement. The SII NE15 runs at 21600bph (compared to the 28800bph of the ETA), but has a 50hr power reserve which is 10 hours longer than the ETA. These are both great movements that should keep time beautifully and require little service. The BlueRing is limited to 100 pieces of each color choice, and the SII-powered black dial is already sold out.

The timekeeping on the BlueRing is very good; our review sample operated within the normal range for any ETA 2824-2, and when measured as carefully as possible, appeared to be running +/- 7 seconds a day. The BlueRing has a date window at the 4:30 position, and the date wheel is black text on a white background.

The crown action for the date and time is very good. The winding is strong and sure, and the setting notches are easily found. We did find that the bezel required quite a bit of effort to spin — a good thing for when you’re diving, but sometimes inconvenient for everyday wear. 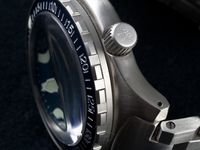 The Halios BlueRing is one of the few watches we have seen recently that really stands out on a purely aesthetic level. This is a unique and beautiful watch, both at a macro and a micro level. The BlueRing is part vintage and part modern; it shares design elements seen on 60’s era divers, and others from modern dress divers. Its large dial and domed crystal make it feel like it was pulled out of a time capsule, but the inlaid markers, wide hands, and extreme luminosity remind you it was made recently, and by someone who loves dive watches.

The shade of blue used on the dial and bezel is amazing. Generally, I do not care much for blue-dialed watches, but the matte blue dial has such a vintage feel that I found it irresistible.

Halios has carried over the sparse dial design found on the Holotype to the BlueRing which only shows the Halios logo, and the name of the watch on the dial. The hands are wide and very easy to read in any circumstance. This is a watch designed to be worn and used as a true diver, and comes rated to 300m water resistance.

The BlueRing has a much stronger focus on detail than the Holotype did. The orange second hand is a beautiful contrast over the blue dial, and the crown is excellent. The lume is beyond adequate; it’s very bright, and will give any other watch we have reviewed a run for its money.

The bracelet is large, heavy, and very chunky. It comes with a fold-over dive clasp with a proper dive suit extension hidden in the clasp. Is has screwed links and solid end pieces that fit the case beautifully. Just like with the Holotype, if you get the BlueRing, tighten all the screws in the bracelet when you’re finished sizing it. In fact, a dab of Loctite Blue might even be in order (a good idea for any bracelet with screws).

The BlueRing comes in a large Pelican brand dive case as opposed to the normal boxes that most watches ship in. The review example is bright blue, and you can see it in the attached video. The interior is fitted for the watch, and really shows that Halios understands its market.

The Halios Holotype is a beautiful and well made dive watch from a great independent brand in Vancouver, British Columbia, Canada. With only 100 models of each dial color, it offers exclusivity in ownership that extends beyond the distinct design and excellent packaging.If you missed your chance on the Holotype, the BlueRing can be secured for $499 USD. The Holotype sold out at $360 and had a lesser Miyota movement. At $499, the BlueRing is competitively priced, but has no aesthetic competitors. If the Halios BlueRing strikes your fancy, we recommend being quick since the Holotype sold out in months, and the BlueRing is setting a very good pace as well.

We would like to thank Halios for the review samples.