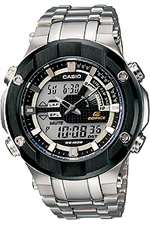 A few months ago, I received an interesting and rather surprising watch in the mail: a Casio Edifice EFX700D-1A1V. I like some Casio models, but as a whole, they usually don’t register as one of my favorite brands, primarily due to the styling of their most popular lines. I could never get behind the G-Shocks (unlike Christian), and despite the amazing functionality of the Pathfinder family, I always found them too big for my wrist. In retrospect, it was probably because of this bias of mine that Christian passed the Edifice on to me. I think he wanted to challenge my preconceptions.

I must admit, the watch I received changed my view of Casio in a profound way. The Casio Edifice EFX700D-1A1V (hereby referred to as the “Edifice 700”) is a great looking watch — probably the first analogue/digital combination watch I’ve seen that actually looks better then the analogue-only version. It’s just a flat-out good looking watch by almost any standard, mixing styles and influences, sporting a high-contrast dual display and a very respectable feature list:

As previously mentioned, this watch really sings to me. I love the mix of different visual elements from the screwed black bezel to the subtle inlay between the digital readouts. The dial has a pleasant depth and is accented by a tiny gold “Edifice” label (the Edifice 700 is part of Casio’s premium “Gold Label” line). The digital readouts are high contrast, very easy to read, and are complemented by a two-hand analogue movement that is synchronized with the digital time panel (the bottom readout). The addition of a sapphire crystal and 100 meter water resistance is a welcomed bonus given the price.

The Edifice 700 is controlled like just about every other Casio: a button on each corner of the case has a contextual use given which mode you are in. Modes include:

That’s a pretty stacked feature list. I loved having a different time zone displayed on the screen for when I travel, and a countdown timer is surprisingly useful. One of my favorite features is probably the EL backlight. It’s a “reverse” backlight which illuminates the numbers rather than the area around them. Not only does it look extremely cool, but it’s very practical, as well, since it makes the watch unusually legible in the dark.

The 700 has a solid stainless steel bracelet with solid end links (on a $210 watch!), and a push button flip-lock clasp. Everything about the bracelet is great: it’s quiet, heavy, and shiny. Of course, it’s not the best bracelet I’ve ever come across, but it’s probably on par with the bracelet on the TX 730 Flyback Chronograph (which is a $600 watch).

When you open this watch, you almost forget it’s a watch and begin to believe that you are handling the packaging for a tiny bottle of liquor. It comes double boxed and says “Edifice Gold Label” on the outer and inner boxes. Once inside, the packaging is plain and similar to the box for any other Casio, Seiko, or Citizen. In general, it’s a big step up from what you usually see from Casio.

The Casio Edifice EFX700D-1A1V is indeed worthy of its “Gold Label” moniker as it’s easily the best Casio I’ve ever worn. During my evaluation, it got a lot of compliments with its unusual but unified style, and I love its long feature list which looks even better next to its entry-level pricing. If you’re looking for a great “daily wear”, make sure you check out the over-performing Casio Edifice.