Last year I posted an item about a discontinued analog-digital watch from Omega, the X-33. Today I am finally posting the actual review of the watch, obtained from ebay shortly after that posting. Why the long delay? Well, read on and see!
To recap, the X-33 is one of two watches from Omega space-qualified by NASA. There’s the mechanical Speedmaster (worn on the moon), and the quartz X-33, known as ‘the Mars watch.’ The X-33 was released in 1998 and discontinued in 2006, though Omega still sells them to military aviators directly at a discount. (No, please don’t bother asking, I have no way to get one for you and don’t know anyone who does!) Omega went through several design iterations before releasing it, and two versions hit the market. This one is second generation, with a matte-finished bezel, plunger ‘crown’ and improved buttons. The case is brushed titanium, the buttons are actually stainless steel finished to match the case, and the crystal is domed sapphire with dual-sided antireflective coating. The analog hands are lumed with Superluminova, as are the hour markers and bezel dot. Note that the bezel is bidirectional – this is a pilot’s watch, after all, not a diver.
Read on for more!
Despite being several years old, there are quite a few things about this watch that remain unique. The curved LCD display, which allows larger digits on a round face, the super-bright 8 lux backlight, the ‘mission timer’ feature, and of course the special super-loud 80dB alarm. On the negative side, the alarm volume (which was a NASA requirement, so it could be heard in a loud environment) reduced the versatility of the watch – to get that loud, Omega used a dual-layer caseback with vents, meaning that it’s really, really not very waterproof at all. It’s rated to 30m (100ft), but having disassembled mine, I wouldn’t recommend showering or swimming with it. The gasket is held in place by vertical pressure from the screwed caseback, which is less effective than a screwdown design. And, of course, the venting doesn’t help either. Engineering is all about tradeoffs, and for a watch designed for space and flying, this is a perfectly reasonable one. Those of us more earthbound, however, have to keep it in mind.

Another negative is the AR coating on the crystal. I got this one used, and as you can see, there are many small scratches in the coating. In person, it’s not that obtrusive, but I do wish they had more durability. From what I’ve read, Sinn is the leader in this — perhaps Omega can license their technology in the future.

Similarly, the unalloyed titanium body picks up scratches easily. Compare it to the 2006-vintage Citizen PMT56-2711, which, with its titanium nitride surface treatment, has only a single scratch despite lots of wrist time: 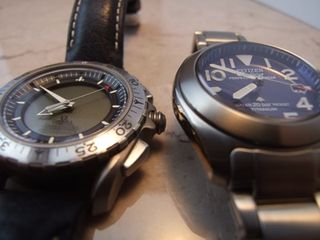 There’s a lot to like about this watch. Usually, I leave the LCD display off, which saves a bit of power and has a very uncluttered look. Since the hands are driven directly by the watch, this is my preferred wearer for traveling: it has a shortcut for quickly changing the hour, which is perfect for changing timezones.

I’ve also worn it to fly in a Piper Lance. As expected, the watch is unmatched for aviation: I used mission time for flight time, the timer for switching fuel tanks, the UTC time for weather and flight plan, and stopwatch for time since engine start. It was easy to hear the alarm, even in a very noisy plane with headphones on, and the display was super readable. I should also note that, when flying, I really prefer watches without reflective surfaces, as the glints and flashes of light are annoying and distracting; the X-33 is superb in this regard. I also quite like how the combination of domed AR-coated crystal and hands makes the watch readable from a wider range of angles than anything else I’ve ever seen. It’s readable at very oblique angles, which is also nice for sneaking the time in long meetings.

If you look closely, you’ll see that the hour and minute hands are white, and the second hand is a light shade of grey. It’s a nice touch. Also look at the complex curved shape of the lugs; very beautiful and yet hardly noticeable. The button guards are sculpted ridges of metal, and yet the buttons are easily pressed while wearing gloves. Speaking of buttons, I have to mention that the X-33 has the nicest of any I have ever pressed, bar none. Firm, very definite, almost a ‘snap’ feel to them. Lovely. The electroluminescent backlight is blindingly bright to night-adapted eyes, so I usually rely on the excellent lume. It’s as bright as my Seiko divers, though applied in smaller areas.
A lot of Omega watches have more bling to them, but the X-33 is very understated. The logo on the dial is only visible at close scrutiny, and the low sales volumes mean that I’ve never had anyone recognize it. I did have a nice conversation with a NASA collaborator about it once I pointed it out, though – apparently some of the pilots in the flight test division have them. From what I’ve read on the net, it’s also still popular with military pilots, so I yet hold out hope that Omega will reintroduce it again to the market.

Mine came on Omega’s leather-backed kevlar strap, which is cool but impractical. (At least in the Air Force, synthetic straps are forbidden in aircraft, as they will fuse to your skin in a fire. Ouch.) I put it on a plain leather strap with white stitching, which works well for a watch that should never be wet anyway. There is a version on a titanium bracelet as well. 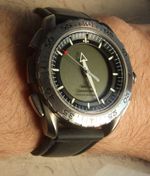 Prices have gone up and down on the used market, I (over)paid $1,300 for this one without box or papers. That’s an awful lot of money for a used quartz watch, especially now that competition like the new aviator G-Shocks are available. The X-33 is a complex tradeoff: unique features and history, but so-so value and durability. It’s more of an irrational decision — decide for yourself if it calls to you!
For more information about the X-33 project, history and different models, I recommend reading Ryan Rooney’s pages.
By Paul Hubbard