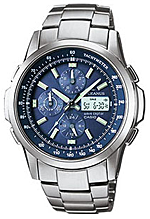 Casio accomplishes another first with the Oceanus. There’s nothing new about combining atomic time calibration with solar power, but I don’t think I’ve ever seen a solar-powered atomic chronograph. The Oceanus is a very functional and sophisticated watch in a rugged but attractive package. Features include:

The Oceanus is actually being marketed and sold strictly as “Oceanus” in the US. You can tell from the Oceanus website they are purposely distancing themselves from the Casio brand, and are trying to avoid overt usage of Casio-specific terms like Waveceptor and Tough Solar. Additionally, the Japanese version of the Oceanus is clearly branded Casio while the US version is branded only as Oceanus (the picture to the right is of the Japanese version). My theory is that Casio’s marketing team doesn’t think Americans will pay between $350 and $550 for a Casio. In this country, Casio’s are typically considered cheap digital watches which compete with Timex and are sold in plastic display cases in stores like Radio Shack and Kmart. If you’re a moderate watch geek, you may be aware of Casio’s camera, GPS, MP3, and remote control experiments. But very few Americans realize that Casio makes some excellent higher-end digital watches which, in my opinion, are easily worth $550 (retail), and even quite a bit more. Casio electronics and materials like titanium and sapphire go together like chocolate and peanut butter if you like geeky, well-made timepieces. It used to be that high-end G-Shocks provided the best combination of features and materials, but at the expense of aesthetics. The Oceanus, on the other hand, is for those of us who want ruggedness, functionality, and good looks, all in the same package.