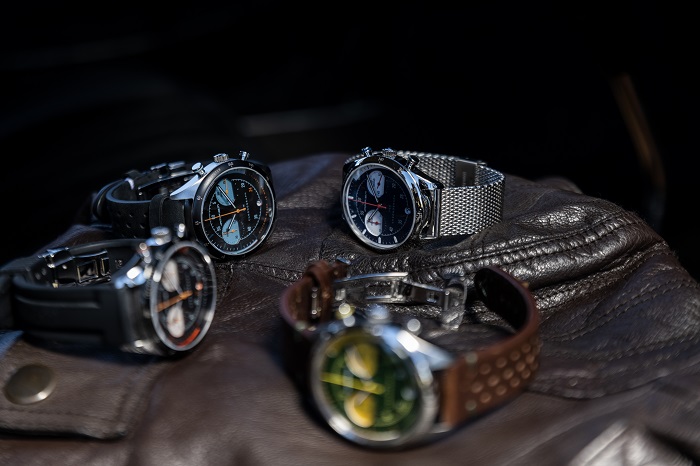 What makes a good racing watch? It’s a question we often ask ourselves and the truth is there have been countless excellent racing timepieces over the years. Some criteria we look for include a strong build quality, smooth design elements, and more than a touch of class. French watchmaker ARPIEM is encapsulating all of these factors and more with its stunning new Tribute collection.

Indeed, ARPIEM has done something truly interesting with the Tribute watches. The company has crafted a series of timepieces that evoke the glory days of motor racing while showcasing the best of modern craftsmanship and manufacturing.

By using unique designs inspired by the racing world of the 60s and early 70s, the ARPIEM Tribute collection is instantly desirable. With an original design and undoubted quality, the range provides original and affordable racing watches that will appeal to aficionados.

ARPIEM’s new collection is now available on Kickstarter as the company seeks to gain funding. The company is seeking just over $20,000 and is almost certain to achieve much more than that goal as the Tribute series is already making waves on Kickstarter. Pledges for a timepiece start at 179 Euros, a generous price considering the obvious quality on display.

The Tribute collection comes in four unique and interesting watches:

ARPIEM TRIBUTE TGH – Inspired by British motorsport great Graham Hill, the TGH is a romantic call-back to the sixties. The halcyon days of racing are brought back to life and you will feel the era wrapped around your wrist. ARPIEM has designed the Tribute TGH in navy blue and white to represent the color of Hill’s racing helmet. Features of the watch include an engraved buckle, stainless steel Milanese mesh strap, and a quick release strap. Little touches like a red number 5 to show the number of Monaco GPs Hill won just add to the mystique of the watch. 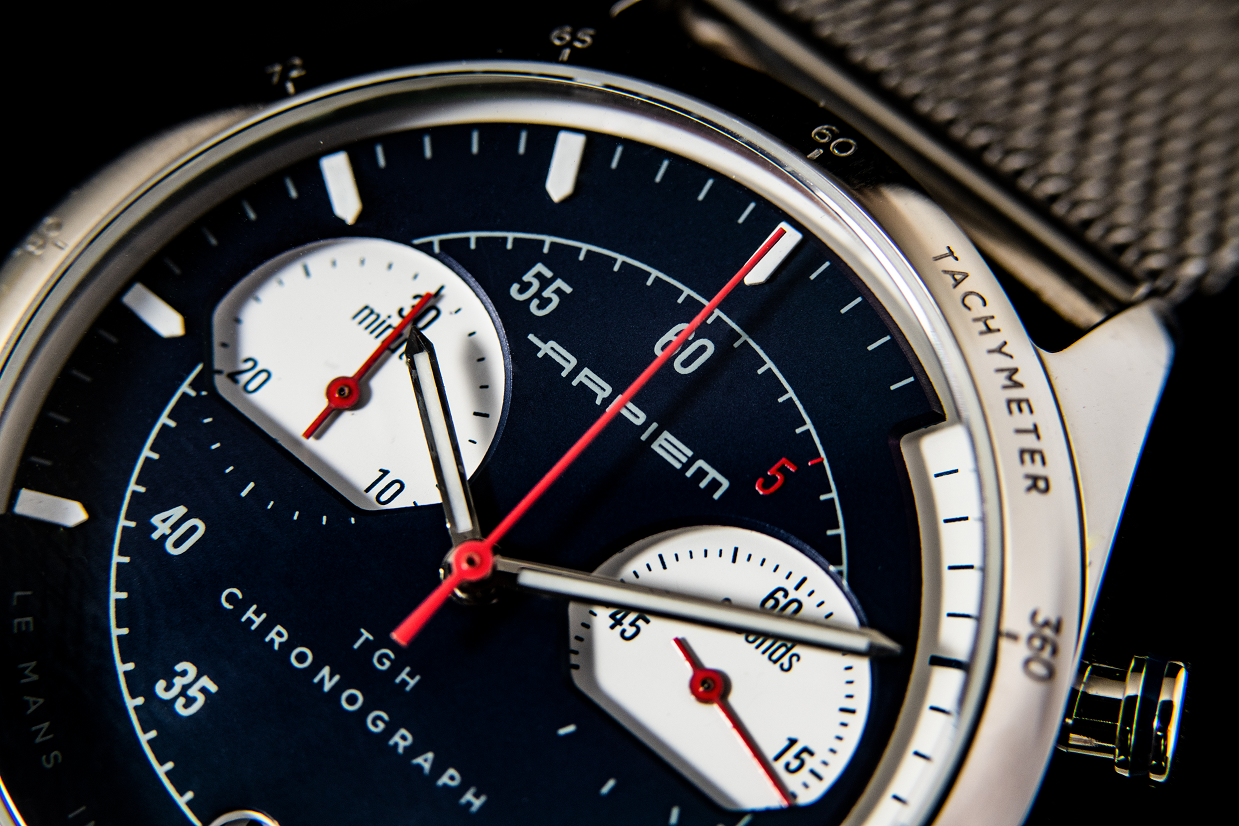 ARPIEM TRIBUTE TBML – New Zealander Bruce McLaren serves as the inspiration for the TBML. Despite passing away in 1970, few people have had such an influence on racing as McLaren, and the TBML is a sporty homage to the legend thanks to a sturdy silicone strap. An orange flair around the timepiece recalls the famous color of old McLaren cars, while the index #32 references the age in which Bruce died. The kiwi symbol was used on McLaren racing cars and is found here on the top of the dial. 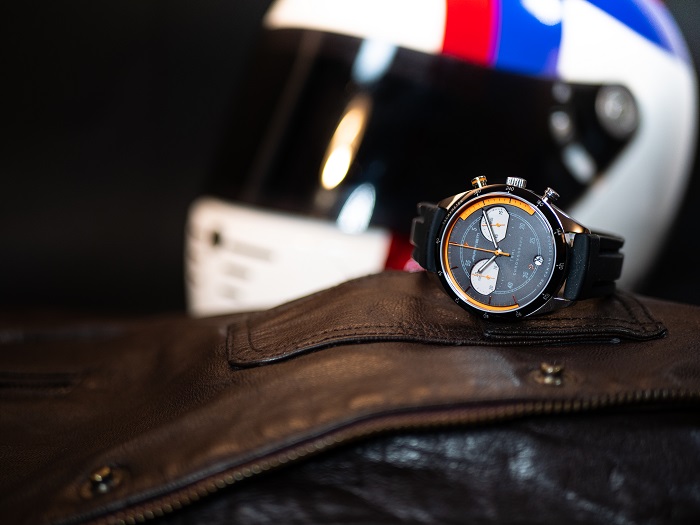 ARPIEM TRIBUTE TJC – Jim Clark is a name that has an almost mythical effect on motorsport fans. The Scottish F1 world champion was known for driving Lotus cars, and it is the famed green and yellow livery of those machines that serve as inspiration for the Tribute TJC. This elegant color detail is enhanced by an aged brown Italian calf leather strap. Details include the engraving of “Farmer-Racer”, which was engraved on his tombstone and reflected his passion for farming. The watch also has the index #25 to highlight how many career wins he achieved in Formula 1.

ARPIEM TRIBUTE TJW – The final watch in the Tribute collection is the TJW, a timepiece that pays homage to the team owner John Wyer. An iconic name in endurance racing, Wyer became a giant of motorsport during the sixties with his unforgettable blue and orange cars. This watch recalls that famous colorway and couples it with a black Italian calf leather strap. Details on the timepiece include the index #24 to reflect the Le Mans 24-hour race, which is part of the legend of John Wyer. 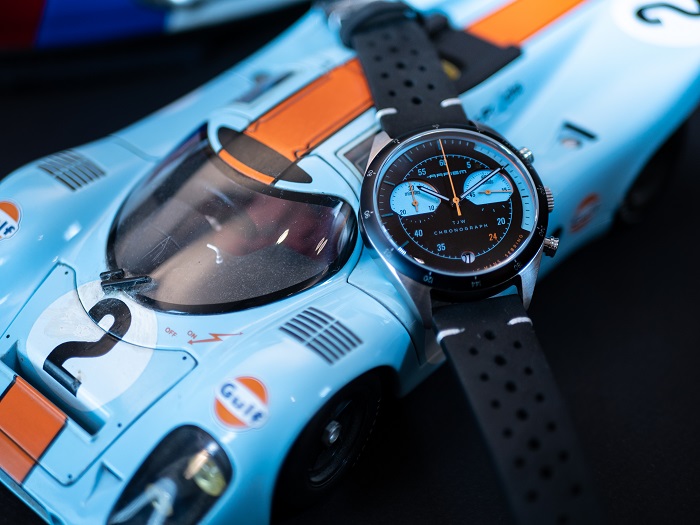 ARPIEM Tribute watches are not just aesthetically beautiful, they are also feats of design. Featuring a 41mm diameter and 12.5mm thickness, each timepiece features Swiss RONDA Z50 Chrono quartz movement. Elsewhere, ARPIEM used domed crystal sapphire glass to ensure a robust protection. The company says it shaped the secondary dials to remind of manometers used in cars during the sixties.

By triple layering the dial, ARPIEM ensured each Tribute watch has a noticeable dial volume, adding to the obvious quality of the product. For the main hands, the company coated the components with SUPERLUMINOVA BGW9 for a photoluminescent effect. Finally, ARPIEM configured the Tachymeter like a diving watch, with speed at each position of 5 seconds.