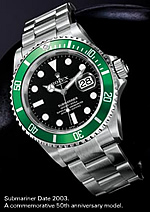 I can’t deny that I’m a big Rolex fan. But for a watch enthusiast to love Rolex is a little like a basketball fan saying he loves Michael Jordan. It’s sort of unoriginal, and even a little pedestrian. But I make no apologies for my tastes. I think Rolexes are some of the best made and most beautiful watches in the world.

I have a GMT Master II and a Sea Dweller (review coming soon), but the quintessential Oyster Professional Rolex is the Submariner. I’m hoping to make one large watch purchase in 2007, and I’m trying to decide if it’s going to be an Omega, a Breitling, or the Submariner. And if I do go with the Submariner, should I try to pick up the commemorative 50th anniversary model? While doing some research on the “Kermit”, I came across some interesting Submariner history:

I should note that the change in the anniversary model’s dial is not to be taken lightly as Rolex puts an immense amount of consideration into their designs (which is why they are so classic and widely replicated). The anniversary Submariner has what is referred to as the maxi-dial which means that the hour markers are larger, and the minute hand is slightly wider (making it more visible, especially in the dark since it holds more luminescent paint). It is speculated that other Oyster Professional Rolex models (the GMT Master II, Explorer II, and the Sea-Dweller) will adopt the maxi-dial which seems to have been pioneered by the Yacht-Master.