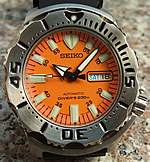 After James’ review of extreme dive watches, I’d like to bring you back to Earth with a review of a modern classic: the Seiko Orange Monster.

Introduced in early 2001, and officially called the SKX781, this bold diver from Seiko quickly inherited its nickname from its older sibling, the “Black Monster” (SKX779). There are also more expensive limited editions available in blue, yellow, PVD black, and red.

Let’s start with some specifications:

The first thing you notice about the Seiko Orange Monster is the dial color. The Swiss company Doxa did research in the late 1960s and learned that orange is the color most visible in deep water, where shorter wavelengths get absorbed. They introduced the world’s first commercial dive watch, the Doxa Sub 300t, in 1967 with an orange dial, and you see it used on dive watches to this day. It makes for excellent above-water visibility, too, as the black hands contrast well against the orange face. Like the Doxa, this Seiko is a real diver’s watch, rated to 200m (660ft) and bearing the “Diver’s” logo that indicates ISO6425 compliance. (ISO6425 is the relevant standard for waterproofing, legibility, luminosity, shock resistance, anti-magnetism, and band solidity. Compliant watches can bear the “Diver’s” mark.)

Seiko is well-known for excellent nighttime visibility, and the Orange Monster excels in this regard. With large amounts of Lumibrite on the hands, indices, and bezel dot, the Orange Monster glows like a torch and is easily legible in pitch-black after eight hours or more. The hands each have a distinct shape, which also helps legibility as the lume fades.

The Orange Monster is a fairly large watch, but I find that it wears very comfortably due to its low profile, comfortable bracelet, 4 o’clock crown, and nicely etched caseback that keeps it in place on your wrist. I’m particularly fond of wearing it with a rubber Z22 strap, though the orange and black combo is a bit garish.

After wearing the Seiko Orange Monster for a while, you start to notice the small details that are really unexpected at this price:

In the interests of balance, let me list off the negatives as well:

And that’s about it. None of these issues are show-stoppers, and considering the price, it’s hard to kvetch too much. Perhaps the greatest praise of the Orange Monster is the fact that on various forums dedicated to dive watches, every now and then someone asks for advice on a dive watch to actually dive with, often in locations where expensive brand-name items are a risk. The most common advice?

“Get an Orange Monster.”

The orange really pops. Notice the generous use of Lumibrite.

The Orange Monster works on a bracelet, or on a rubber strap.

The Orange Monster has a big crown that’s easy to grip.

The dive extension allows the Orange Monster to be worn over a wetsuit. Also notice the directional arrow to assist in removing links from the bracelet.

The Seiko Orange Monster all boxed up.

A nice shot of the Orange Monster on Paul’s wrist.