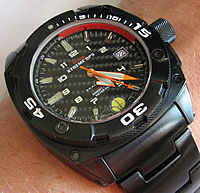 I did my first review of an MTM Special Ops watch almost exactly two years ago. If I remember correctly, it was the only MTM model available at the time. MTM is now up to no fewer than eight different models with a very impressive selection of materials, finishes, and features. Although each MTM model is interesting in its own right, the new MTM Black Seal Xtreme Dive Watch stands out as an unusual and impressive feat of engineering.

You may remember the MTM Black Seal from an article we did last month on extreme dive watches. The most notable feature is the fact that it’s completely waterproof. What’s the difference between being waterproof and water resistant? The easiest way to explain it is that the MTM Black Seal is completely unambiguous in its claims regarding water and pressure resistance: the Black Seal has been proven in a Swiss laboratory to remain fully intact at the deepest known point on earth, the Mariana Trench, which is about 12,000 meters, or about 39,370 feet.

MTM’s secret is the silicon oil filled case which is designed to equalize the pressure exerted on the watch in a way which makes it virtually compression-proof. There are a few other watches out there which make the same claim, but none with quite the unique feature set of the MTM Black Seal:

It’s sort of easy for a pressure proof case to steal the show in terms of features, but there’s plenty more to love about MTM Black Seal:

I find the overall presentation of the head of the MTM Black Seal to be exceptional. The red of the chapter ring between the 12 and 3 o’clock positions, the highly visible orange hands, the polished and reflective indices, and the yellow MTM seal against the black sheen of the carbon fibre dial all come together to give the MTM Black Seal a striking appearance. An added benefit of the silicon filled case is that it makes the entire dial visible from almost any angle which is a surprisingly cool effect.

I’m particularly fond of the tritium tubes embedded in the indices and the hour and minute hands. Tritium is a radioactive gas (don’t worry, it’s safe — it’s unable to penetrate human skin, so just don’t swallow it) with a half-life of 12.32 years which means it glows brightly for about 25 years. Unlike luminous paint which needs to absorb ambient light in order to glow, tritium will glow consistently without any exposure to light at all. Why is this useful? If all you need is a dive watch which will remain visible throughout the course of a couple hour dive, you don’t need tritium. If you want a watch that you can see at anytime during the night, or if you work for long periods of time in a darkened environment, or if want a watch that you can use for night diving, you probably want tritium. I’m an amateur diver, so I don’t need hardcore equipment, but I really like being able to wake up at any time during the night and easily read the time. It’s worth noting that the MTM Black Seal actually uses a combination of tritium and some sort of luminescent material, as well. The tritium tubes are used for the indices and hour and minute hands, and the luminescent material is used for the numbers which means initially, you can see everything in the dark, but over time, only the indices and hands are visible (which is really all you need).

The MTM Black Seal is a big watch. With a 44 mm case and weighing in at 7.5 oz (about 2.5 ounces heavier than the bulky Rolex Sea-Dweller), it’s a serious piece of equipment. That said, I have relatively narrow wrists, and somehow, I’ve been able to get away with wearing the Black Seal. The shape of the case and lugs bends nicely along the curve of my wrist which allows it to sit very comfortably in place, wearing much lighter than it actually is. And of course the Velcro strap reduces the weight considerably, as well.

I really like the fact that the MTM Black Seal uses hex screws for the bracelet links, and to attach the bracelet to the lugs. Three hex keys are included with the watch which makes it very easy to size yourself, and the spring bar micro adjuster lets you further refine the fit. I would love to see other stainless steel bracelets adopt a system like MTM’s. Why should people have to bring their watches in to a jeweler to get adjusted? The hex screws make the bracelet easy to size, strong, and in my opinion, lend it a unique and tough look.

And then there’s the crown. The crown is big and textured to make it easy to grasp, and the threading of the crown and stem is precise which makes it very easy to release and reseal. This may seem like a given, but I’ve handled enough watches with difficult to manage screwdown crowns that I really appreciate when it’s done right.

We’ve started paying closer attention to packaging recently on Watch Report because we’ve come to believe that it’s an extremely important aspect of the experience of buying and owning a watch. Revealing your watch — especially one you’ve paid a decent amount of money for — should be a rewarding experience worth savoring.

Whether you like the presentation of the MTM Black Seal will depend largely on your personality, and chances are, if you’re interested in a watch like this, you’ll love it. The packaging is tough, functional, practical, and very appropriate. The Black Seal comes in a watertight, airtight, dust-proof, and crush-resistant Seahorse model 120 case which most men will covet almost as much as the watch inside. Open the case, and you will find a foam block with the watch, tools, and appropriately sparse documentation (the instructions and warranty information fit on a single card) perfectly nestled within. I personally think this is one of the most practical and just plain coolest presentations I’ve seen in a tool watch like this.

If I had to choose one word to describe the MTM Black Seal, I would call it extreme. It’s big, heavy, tough, and at $1,800, it’s not cheap. It brings a lot of very interesting features together into a single unique package, however. If all you’re looking for is tritium tubes, check out Luminox. If you just want an affordable silicon filled diver, consider the TechnoMarine Abyss. If all you’re looking for is a well constructed dive watch, see the Seiko Orange Monster. But if you want all of these things and much more in a single watch which will probably serve as much as a conversation piece as a diving instrument, you’ll want to check out the MTM Black Seal.