There’s been a lot of talk recently of using the new iPod Nano as a watch (the iWatch, as it’s being called), so I thought I’d pick one up and give it a try. 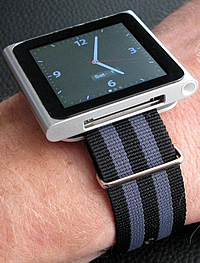 Although using an iPod nano as a watch is definitely somewhat gimmicky, it actually worked better than I expected. If you’re someone who is really into watches, I doubt an iPod Nano would replace what’s already on your wrist or sitting on your dresser. But if you’re more into gadgets and music than timepieces, strapping an iPod Nano to your wrist might be the way to go. Just consider going with the cheaper 8GB version ($149) so if you smash the crystal (screen, I guess I should say) or get it wet, you can pick up another without too much regret.