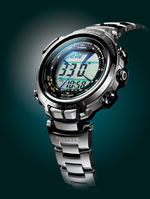 On April 1 2009, Casio will start selling the newest Protrek model: the PRX-2000T. It’s an evolution of the ABC watch (Altimeter/Barometer/Compass) reduced in size and upgraded in terms of build materials. Here are the specs from the translated press release:

Overall, it looks like a really nice watch. The reduced size, streamlined case and improved materials are something I look forward to reviewing. I do wonder why they priced it so high, though: The Ultimate Pathfinder has a similar feature list, and is only $400USD. It’s not clear to me why this one is worth over twice as much.