Ask the average American to name a fine Swiss watch, and nine times out of ten you’re going to hear Rolex. You might get the occasional Omega or Tag Heuer, and if they really know what they’re talking about, Breitling, IWC, Zenith, or maybe even Patek Philippe.

What you are not likely to hear is Bell & Ross, not because they don’t make some very compelling timepieces, but primarily because they have only been around since 1992, which for a Swiss watch company, is practically brand new (compare to Rolex which has been around since 1908, Omega which dates back to 1848, Tag Heuer which has been around in one form or another since 1860, and Patek Philippe which was founded in 1839). Not only is Bell & Ross a relative newcomer to the world of Swiss watches, but they are also not widely distributed in the United States. With only 45 retail locations throughout the country, you’re averaging less than one store per state, which makes a Bell & Ross watch more than three times as difficult to find as a Patek Philippe. Fortunately, I happen to live about 20 minutes from the only Bell & Ross retailer in the Washington DC area, so I went in one day for an afternoon of window shopping and questions. What I found was a display case full of beautiful, unique, and very well made watches.

Bell & Ross watches primarily focus on dependability. They are watches for professionals like pilots, divers, astronauts, and even bomb disposal experts, whose jobs — and in some cases, even lives — may depend on their watches. Each Bell & Ross timepiece is designed and built with four basic principles in mind: readability, performance, precision, and water-resistance. When designing and engineering a new watch, the Bell & Ross motto is “the essential is never compromised by the superfluous” which I think is apparent in their stark, straightforward, and professional designs. Each watch is tested under varying conditions in various positions, monitored, and adjusted over a two week period until it is 0 to +10 seconds per day (for automatic watches) with a 40 hour reserve. Additionally, each watch is tested for its resistance to water, pressure, ultra-violet radiation, heat, humidity, shock, magnetic fields, hostile chemicals, and substantial temperature variation. If the watch survives all that, it is examined by a master watchmaker who makes the final decision as to whether it can actually leave the factory or not.

Although I do not own a Bell & Ross watch myself, and therefore cannot speak directly from experience, in reviewing their collections, there are four watches which seem particularly exceptional to me:

The Bell & Ross Space 3 chronograph is designed for space mission pilots. The emphasis of the watch is on readability and profile: the pushers and the crown are set down into the case so that nothing protrudes. The crown is hidden by what Bell & Ross calls the T-Crown System. The crown is attached to a toothed telescopic extension which can be protracted to allow the crown to be unscrewed. Once the crown is screwed back down, the extension can be fully retracted into the case where it automatically locks flush into position through a spring loaded system to give the watch a smooth outside edge.

Features of the Bell & Ross Space 3 include:

The Space three comes with either a white or black dial, and a metal or rubber strap. Retail pricing ranges from $2,500 to $3,150.

The Hydromax is one of the most sophisticated and impressive diver watches I have ever seen. It is built for nothing less than the absolute extremes of deep diving. Bell & Ross has used pressure tanks to demonstrate water resistance equivalent to 1,110 BAR, which is 11,100 meters — well over 36,000 feet, or about 6.8 miles. (That’s the first time I have ever expressed pressure resistance in miles!) In other words, you’ll need to be much more concerned about your life than your watch considering the absolute deepest dives are probably “only” around 310 meters, or a little over 1,000 feet. A nuclear powered attack sub can only go down to about 2,000 feet, and sperm whales don’t go down any deeper than 3,200 feet. In fact, the Hydromax is water resistant to almost exactly the deepest ever recorded ocean depth (discovered by a Soviet submersible in 1957). The secret of the Hydromax is that it is filled with a transparent oil called Hydroil which helps to equalize the pressure inside the case.

Features of the Bell & Ross Hydromax include:

Dials are available in black or white, and the Hydromax comes with a steel bracelet, and both a rubber and a canvas strap (for fitting easily over a dive suite). Retail for the Bell & Ross Hydromax is $2,400.

The Function Collection adds a bit of modernity to the classic Bell & Ross lineup, combining a traditional analog display with a sophisticated but subtle digital LCD. At first glance, you are likely to mistake this watch for an elegant but simple analog timepiece — depress the crown, however, and the previously invisible LCD emerges from the white or black dial, dramatically extending the watch’s functionality.

The Function collection comes with either a black or silver dial. You can choose between a polished stainless steel bracelet, a leather (alligator skin) strap, or rubber strap. Retail prices range from $1,850 to $2,450. 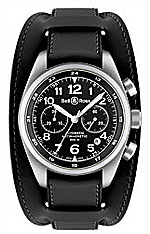 Big watches are in. And so are the wide leather cuffs you often see them strapped to. If you want something tough, bold, and prominent on your arm, but Fossil, Diesel, and Guess watches from the local mall aren’t exactly your thing, have a look at the Bell & Ross Vintage 126 XL and Desert Type 126 XL (with those wonderful, wide calfskin safety straps). These watches were created as a tribute to servicemen (some of the first professionals to wear wristwatches), and are only available in a limited series of 999 number pieces.