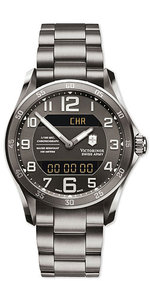 As a former pilot, there are two watches that represent the absolute finest gear for flying: the Omega X-33, and Breitling Aerospace. Both are quartz and analog/digital, and have very different looks. Today’s post is about a very similar watch that has a much more reasonable price tag to the Aerospace, the Victorinox Swiss Army Classic XLS MT. I’ve not yet confirmed this, but I strongly suspect that it has the exact same movement as the Aerospace, the ETA 988.432, making it one heck of a deal. Specifications of the Victorinox are:

List price is shown as $1,095USD, but I would expect a discount from that. Let’s compare to the Breitling Aerospace: 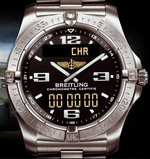 You can kind of see from the pictures that the displays are identical, which makes sense if the movements are the same. You can also see that the Victorinox is larger. 45mm is large but not huge; I’d be happy to wear one.

As with many Swiss brands, Breitling bars selling over the Internet, but Amazon sells them with a list price of $2,795.

There are two things I dislike about this movement: the lack of a second hand (useful for 30-second turns), and the crown-driven operation. It’s really hard to manipulate while wearing it, which limits the functionality a bit. Nevertheless, I’m hoping that I can try the Victorinox, as that price is much more up my alley, and I really like how it looks.