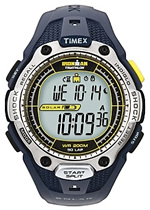 We’re big fans of Timex watches here at Watch Report. They have a wide variety of styles, functions, and we think Timex represents excellent value. However, we’ve always wondered why they haven’t tried to compete more directly with Casio G-Shocks. G-Shocks have been extremely successful for Casio, and although Timex has a great line of Ironman watches, it seems they’ve been hesitant to encroach directly on G-Shock territory by adding features like solar power. Until now.

Timex recently introduced several new solar powered watches. You can see the entire Timex Solar lineup on their site, but here’s a breakdown:

All the Timex Solar watches have the following in common:

Prices range from $80 to $110 USD which, in typical Timex fashion, is very reasonable for what you get. I like that they’ve added what they’re calling FLIX; like Casio, this is a feature that allows you to activate the electroluminescent backlight when its dark just by flicking your wrist. Very clever and useful when you’re in dim situations where your hands are full.

So let’s see: shock-resistant, automatic backlight, and solar powered. These are all things we’ve traditionally loved about G-Shocks, and hopefully we’ll love them just as much in the new Timex Solar watches.

Special thanks to “Fizbi” for pointing out the Timex Solars on the Watch Report Forums.