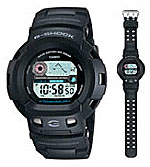 The folks over at Wrist Dreams have picked up on the new vibrating Casio G-Shock GW-400CJ-1JF marine sports watch. I was just commenting the other day on how Casio is really pushing the limits of digital watches, and as if to prove my point, they announce one of the most interesting and feature-rich digital watches I’ve ever seen. The most unique feature of the GW-400CJ is that the countdown timer, alarm, and time signal can use a vibrating alarm rather than an audible one so that it can be effectively used in high winds, while in the water, or in other situations where it’s difficult to hear faint high-pitched beeps. The other thing that really caught my attention about this watch is the sheer number of features they packed into it:

A truly amazing watch. Read the press release in English, thanks to Google’s translation tool. The Casio GW-400CJ should go for around $225, not counting shipping from Japan, and a generous tip for your Japanese connection.