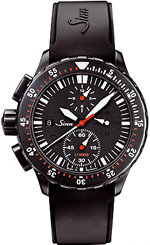 I’ve written about Sinn watches before, and in particular, their commitment to innovative engineering. Now it looks like they have outdone themselves once again with a new dive chronograph (stopwatch). Meet the Sinn U1000, a mechanical watch waterproof to 1,000 meters (3,300 feet), and available in either steel or PVD black.

As with the other Sinn watches, this one is made from Tegimented steel which is both harder and more corrosion resistant than the normal 316L-grade steel. Innovations like argon gas filled case, copper sulphate crystals (to dehumidify), and ultra-wide-temperature-range oil are all present and accounted for in the U1000. (To learn more about these innovations, see Introduction to Sinn: a Convergence of Watchmaking and Engineering.) The crystal is, as you would expect, domed sapphire with an anti-reflective coating.

One feature that’s new is the ability to use the chronograph underwater. It’s not often mentioned, but almost every other chronograph cannot be used while submerged. The action of the buttons is very difficult to seal, so they are generally equipped with locking screws to hold them in place while diving. Sinn has managed to engineer a solution which is doubly impressive given that it works down to the full 1,000 meters of the U1000’s range.

They also moved the crown and pushers to the left to keep them from digging into your wrist, and enlarged the pushers for use while wearing gloves. After all, if you do dive anywhere near that far down, it gets cold, and you’ll need a pair. Since this is rated to -45° (Celsius or Fahrenheit — the two almost converge down that low), glove-friendly buttons make a lot of sense. The Sinn U1000 is also rated to +80°C (176° Fahrenheit), which is, of course, way warmer than you want to get.

The movement is based on the reliable ETA/Valjoux 7750, but Sinn innovated here too. After some modifications, the movement has a 60-minute sum at the 6 o’clock position, replacing the normal 30-minute dial. Much easier to read and use. The hour counter is above it at the 12 o’clock position. They also have a seconds subdial at 3 o’clock position that is black-on-black and very unobtrusive. Overall, it’s a very readable, distinctive, and functional face.

Sinn is also using a new bezel design on the U1000. Most dive watches use unidirectional rotating bezels, which means they only turn in one direction. The idea is that if you bang the watch against something, the bezel can only turn in the direction that would make your dive shorter rather than longer (better to think you have less air rather than more). Although it’s better than dying, having your dive cut short isn’t exactly ideal, either, so the conventional solution is to make the bezel really hard to turn. Sinn, clearly not satisfied with convention, is now using locking bezel which must be pushed down in order to rotate. This makes the bezel both easy to use, and virtually accident proof.

I must confess that I really like the U1000. Previously, I had longed for the Arktis (covered in our Sinn Introduction), but the U1000 is worlds better. The waterproof pushers seem, in retrospect, to be an absolute requirement. Why add features to a dive watch that can’t be used underwater? Fortunately, Sinn asked themselves the same question.