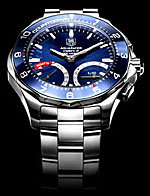 The TAG Heuer 2000 series is being re-released as the new Aquaracer series with an interesting new addition: the Calibre S. The Calibre S is probably a little too sailing-specific for me to justify actually purchasing, but I can definitely appreciate what TAG has done with the Calibre S.

The most striking feature of the Aquaracer Calibre S is the sub-dials. Rather than placing them at the traditional 3, 6, 9 or 2, 6, 10 positions, the Calibre S actually uses semi-circular sub-dials. at the 5 and 7 o’clock positions, inspired by sports cars’ tachometers. Since the sub-dials are not circular, as you might have guessed by now, the Calibre S uses bi-directional motors to position the tiny hands (or should I call the needles?). The point isn’t just to be different, but to create a much more readable and intuitive interface. Chronograph sub-dials. are not particularly easy to read, especially to the untrained eye, so the Calibre S takes a completely new approach by using the main three hands to display time, elapsed time in chronograph mode, and time remaining in countdown mode, the theory being that the three main hands are by far the easiest to read (as opposed to tiny hands on sub-dials.). The right sub-dial shows tenths of a second in chronograph mode (when time is stopped), and in time mode, both sub-dials. work together to indicate the date. In any other mode, the left sub-dial indicates which mode you are in.

TAG Heuer calls the Aquaracer Calibre S the easiest to read chronograph in the world. I really like the idea of using the three main hands for timing functionality since they are what we are most trained to recognize and read at a glance. Nicely done, TAG.

The most sailing-specific feature on the watch is the regatta countdown timer. A regatta is a fancy word for a boat race, and apparently most sail boat races allow 10 minutes for the boats to maneuver into the optimal starting position. When the 10 minutes are up, the race begins. The TAG Heuer Aquaracer Calibre S has a regatta countdown timer which automatically starts counting down from 10 minutes, can be re-synchronized at 5 minutes (apparently there’s a 5-minute warning), and when the full 10 minutes have elapsed, the mode automatically switches to chronograph so that you can time the race. Very slick, in an aristocratic, sailboat-racing kind of way.

The Calibre S movement will be used in other TAG Heuer watches in the future. For more information, check out the TAG Heuer Aquaracer product page. The Aquaracer Calibre S will be available in September of 2005 at a currently undisclosed price.