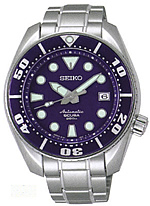 For many years now, Seiko has sold a line of mechanical dive watches based on the trusty 7S26 movement (the heart of the watch). They retail for under $200, they are well made and reliable, and they are generally considered to be excellent “beaters”.

The problem is that the 7S26 movement is burdened with a couple of design compromises: you can’t wind it by hand, and it is a non-hacking movement, which means that when you pull the stem out all the way, the movement doesn’t stop as you might expect (making it very difficult to set the watch with much accuracy). Of course, Seiko sells several other watches with better movements, but they cost more.

The 6R15 divers cost a bit more then their predecessors, but still represent excellent value for the money, and are generating a lot of interest on the net. I can safely predict that they’ll displace the 7S26 divers from a lot of wrists.